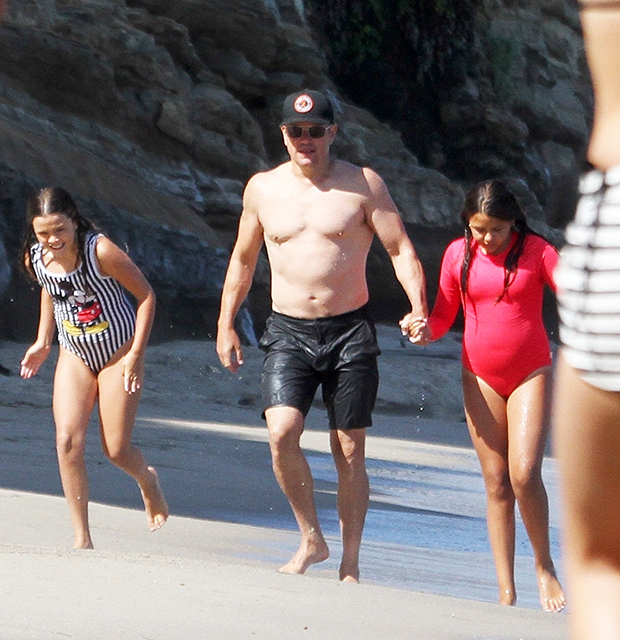 These famous fathers have really taken advantage of quarantine and spent some quality time with their kiddos! See photos and video of Matt Damon, Scott Disick and more celebrity dads bonding with their kids in quarantine!

Quarantine during the coronavirus pandemic has given a lot of opportunity for our favorite celebrities to slow down and take stock of what’s most important in life: family. Over the course of the last few months, so many famous fathers have shown just how important this time has been to reconnect with their loved ones, especially their youngsters! From sightings out in nature to fun Instagram posts, these dads have seriously had a blast with their kiddos.

Some fathers have been very forthright when it comes to showing their longtime fans and social media followers all the fun they’ve been having with their youngsters. Others, who are often a bit more reticent about sharing details of their personal life, have stuck to maintaining some semblance of privacy, but have still been spotted by photographers. Now, we’re taking a look at the dads who have been bonding with their kids in quarantine!

Matt Damon has completely taken advantage of time with his kiddos while in quarantine. On July 15, the actor was spotted with his daughters Isabella, 14, and Gia, 11, who he shares with wife Luciana Barroso, 44, having a fun day at the beach in Malibu. The couple’s third daughter, Stella, 9, was also likely present for the outing, but is not pictured in the image above. Just one month later, Matt was spotted out at the beach with his kiddos again! The fam looked like they were enjoying the waves and surf, as Matt carried around a surfboard. What precious memories they made!

One famous dad who’s been loving time with his kiddos is none other than Scott Disick. The father-of-three has been regularly sharing photos with of his three youngsters — Mason, 10, Penelope, 8, and Reign, 5. On September 2, Scott cozied-up to his sweet daughter and captured the pair in a selfie soaking up the sun. “Me and peep,” the loving father captioned the pic. Scott also pulled double duty earlier in the summer, taking time to bond with his nieces and nephews at the beach! Clearly, this dad has been having a great summer with his young ones.

Jamie Foxx had a lot of fun with his 26-year-old daughter Corinne when the two popped some bubbly in quarantine! “Ooh celebration, celebration,” Jamie said in the video he posted to Instagram on September 15, where the father-daughter pair enjoyed some wine after Corinne earned her first Emmy Award. “I would like to introduce to you my daughter Emmy award winning [Corinne Foxx]!!!! Congratulations on your Emmy award performance!!! in good times on live in front of a studio audience!!! You are my heart and I am so proud of you… Keep elevating… I love you,” Jamie gushed about his daughter in the caption to his post! It was honestly too sweet!

Similar to his fellow actor, Matt Damon, Christian Bale got some time in at the beach with his five-year-old son, Joseph. The two enjoyed some bodyboarding at the beach in Malibu on August 10 and looked like they had a blast. Less than one month prior to the above photo, the two were seen practicing their form in the water on July 20 and Christian looked so proud of his son!

Marky Mark has a new funky bunch with his kiddos Ella, 17, Michael, 14, Brendan, 12, and Grace, 10. On May 17, little Grace got on top of her dad, Mark Wahlberg‘s, shoulders while singing along to the song “Cars with the Boom” by L’Trimm. At the point where Grace said the lyrics, “well, I like all kinds of guys,” her famous father yelled “what?!” It was such a precious moment between the two!

Dwayne ‘The Rock’ Johnson has proven time and again that he is such a Girl Dad. On July 26, the father of three, including little ones Tiana Gia, 2, and Jasmine, 4, got to some “very serious weekend creations” with his youngest girls. The actor helped his two baby girls put together a little bird, and explained to the little ones “it’s perfectly fine our [bird] only has one eye.” Less than one month later, the father-of-three was captured telling a story to his little girls, and the moment couldn’t have been more adorable!

Before he was taking over the basketball court with his incredible activism and athleticism, LeBron James was totally enjoying time with his three kiddos — Brony, 15, Bryce, 13, and Zhuri, 5. In fact, the basketball great even got into some TikTok fun. On March 22, just when quarantine was underway, LeBron and his whole family did the “Something New” challenge set to Wiz Khalifa & Ty Dolla Sign’s catchy tune. LeBron was the first to show off his moves, before his entire family came through!

If there’s one famous father who loves being a Girl Dad, it’s definitely Alexis Ohanian. The Reddit co-founder and husband of 23-time Grand Slam champion Serena Williams has been sharing such tender moments with his and Serena’s daughter, Olympia, over the course of quarantine. On August 31, just as the fam was gearing up to watch Serena take on the US Open, little Olympia decided to play director with her papa and Alexis captured the entire moment! Much like the aforementioned fathers and their kiddos, these two have definitely been having a blast in quarantine.