How to kickflip on a skateboard – SurferToday

The kickflip is one of the most important maneuvers in contemporary skateboarding. Learn how to land it for the first time.

“Do a kickflip!” You’ve probably heard this more than once at your local skatepark.

It is also one of the most common requests Tony Hawk receives from fans when they meet the legend in person.

Alongside the ollie, the kickflip is one of the basic foundations of skateboarding.

If you can ollie and do a good-looking regular kickflip, you could consider yourself an accomplished skateboarder.

In order to try it for the first time, it is recommended that you wear a helmet and pads because you’ll fall – no doubt about it.

Although the kickflip is one of the most popular skate tricks in the world right now, it was initially developed in the 1970s and early 1980s by freestylers.

Over the years, it became a must-perform maneuver in modern street skateboarding and paved the way to several flashy variations.

The double kickflip, late flip, nollie kickflip, switch kickflip, manual to kickflip (and kickflip to manual), and kickflip up curbs and ledges are some of the adaptations you may want to try later.

Let’s go into the detail and dissect the maneuver. The name says it all – it’s a kick and a flip.

“A flick is a motion where you spin the board by flicking your foot in a certain way,” Per Welinder and Peter Whitley wrote on their book “Mastering Skateboarding.”

“Usually, a flick is done with the outside of your foot or near your little toe, but some tricks require a flick from your heel. You will need to flick the board when doing a kickflip.”

Beginner skaters should first master the basics of the sport before jumping right into kickflips.

That includes the ollie, frontside and backside 180, pop shuvit, and the heelflip.

Do you know how to push on a skateboard? Can you slow down and stop your board? Are you comfortable with the ollie?

Remember that building core skills is just as much skating as landing a 900 rotation.

So take your time, and create a solid and consistent foundation before embracing the kickflip tutorial. 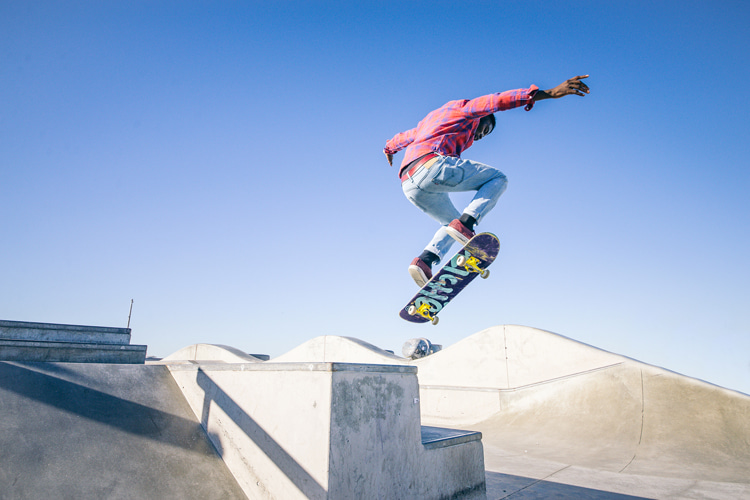 One Step at a Time

Welinder and Whitley shared the following story in their book.

In a way, it is a perfect example of how the kickflip learning process should be addressed – first thing’s first.

“A local ripper was approached by a beginning skater at a skatepark who wanted some advice on how to learn kickflips.

The ripper asked the kid to ollie. The kid’s ollie was pretty weak.

It took him a few tries to land one, and even then, it was just an inch or two (5 centimeters) off the ground.

The ripper said to the kid, “Here’s how to kickflip. Go over to that corner of the skatepark and do 500 ollies. I’ll tell you the secret of kickflips when you’re done.”

The kid went to the side of the skatepark and started his ollies. After about an hour, the kid came back.

When the ripper asked to see his ollie again, it was a solid 6 inches (15 centimeters) off the ground, and the kid nailed it on the first try.

Then the ripper showed the kid how to kickflip.

Without a solid ollie, a lot of cool tricks will be unattainable. Practice those ollies!” 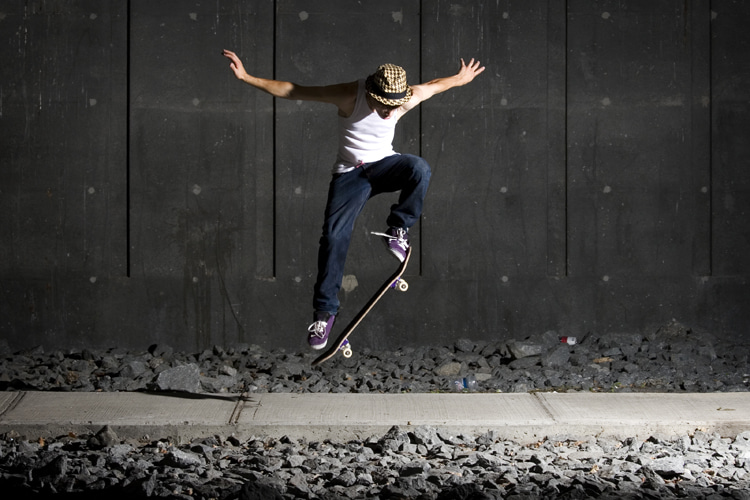 When you’re performing a kickflip, you’re doing an ollie in which the skateboard completes a full rotation along its axis.

The trick is to flick the board by sliding the lead foot up the deck of the board at an angle in a quick and smooth motion.

Because the board takes time to rotate in the air, you should ollie 12 inches (30 centimeters) or more up in the air.

Here’s how to land a kickflip on your skateboard:

1. Push off on your skateboard at low to medium speed;

3. Position your lead foot a little more off the heel side of the board comparing to a regular ollie;

5. Drag your front foot up the board at a 45-degree angle;

6. As your lead foot crosses the trucks bolts, move it toward the heel side of the nose;

7. Use your toes to flick the board;

8. The skateboard will start spinning;

9. As the deck comes around, use your back foot to stop the rotation before the front foot catches;

Muscle memory will do a lot for your kickflip, so practicing, training, and fine-tuning is always work in progress.

You’ll need to land it at least 100 times before mastering the move.

If you notice that the board is shooting out in front of you, try adding more weight on your lead foot while ollieing.

If the skateboard isn’t turning all the way around, try to flick it faster or train an ollie and the spinning part separately.