When Doug Falter lost his beloved surfboard in February 2018, he relentlessly searched for his “baby” for months, before eventually giving up hope that he would ever see it again.

However, in a twist of fate, the 35-year-old professional photographer and amateur surfer reveals that the board has finally resurfaced over 5,000 miles away in the Philippines, in the hands of a 38-year-old schoolteacher and aspiring surfer, Giovanne Branzuela.

Get push notifications with news, features and more.

“Apparently he [Branzuela] bought it from a fisherman to learn how to surf. As bummed as I was when I lost it, now I am happy to know my board fell into the hands of someone wanting to learn the sport,” Falter wrote in a lengthy post on Instagram, detailing the unbelievable story. “I couldn’t imagine a better ending to this story than to see the sport of surfing begin in a place where nobody surfs.”

In his post, Falter describes the day he lost his board. “Feb 3rd, 2018, I remember I counted seven good rides that session,” he recalled. “After catching so many waves I finally wiped out on one and my @lylecarlsonsurfboards board floated away after the leash came off my ankle at around 6:00 pm.”

“I swam as hard as I could to try and get to it. I ran from one end of Waimea Bay across to the other side and scaled the rocks trying to get a visual until it was completely dark,” he explained.

The surfboard holds a special place in Falter’s heart, as he “managed to catch the biggest waves of my life on this board.”

“Thats why it meant so much to me. My hope was that a fisherman might find it. I heard Kauai was a possible landing spot for lost boards like mine. Having never heard from anyone I figured it was lost at sea,” he wrote.

Never miss a story — sign up for PEOPLE‘s free daily newsletter to stay up-to-date on the best of what PEOPLE has to offer, from juicy celebrity news to compelling human interest stories.

In that time, the board made its way across the Pacific Ocean and ended up in the nets of a fisherman in the Philippines. He brought the surfboard home and kept it in his yard — where it eventually caught the eye of Branzuela, who lived next door.

Branzuela ended up buying the board from the fisherman for $40 and became curious about the symbol printed on it. His online sleuthing led him to Lyle Carlson’s Facebook page.

“Fast forward to a couple weeks ago. @lylecarlsonsurfboards posted about a man finding my board in the Philippines and contacting Lyle via Facebook,” Falter explained.

Carlson helped connect Falter to Branzuela, and the pair have become fast friends. Falter even plans to visit Branzuela in the Philippines to retrieve his surfboard and teach him how to surf.

“If it weren’t for travel restrictions I would have raised money to bring boards for learning and surf supplies and be on a plane to go and visit Giovanne,” Falter wrote. “I could teach him how to surf and hopefully a few of his 144 students. He is a teacher at a school on the islands where my board is and I’m sure some of the kids would love to learn. I guess this means for now the most I can do is raise money to send him a goodie package with wax, leashes, books, and magazines for his students to learn English.”

The surfer has started a GoFundMe page, hoping to raise money to help out his new friend.

“Every penny will go to this cause and I’m so excited to put a package together! Thank you to everyone who has donated. It means so much!” he said.

Speaking to Sports Illustrated in a new digital cover story about the unlikely friendship, Branzuela said he was looking forward to meeting with Falter in person one day and that “Sir Doug has a big heart.” 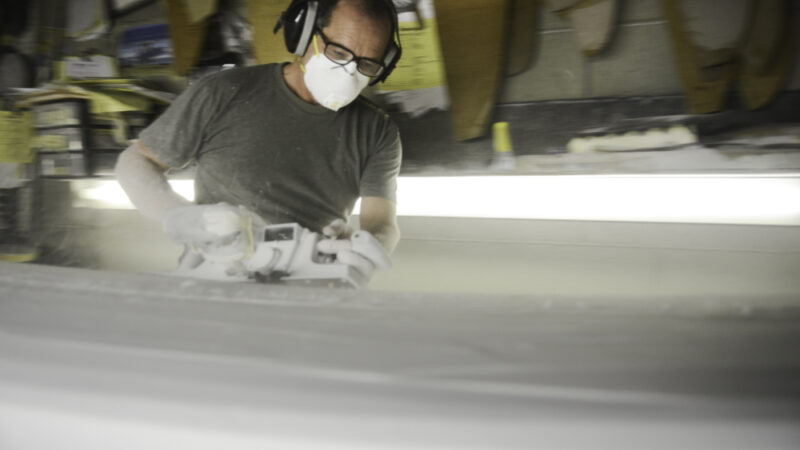