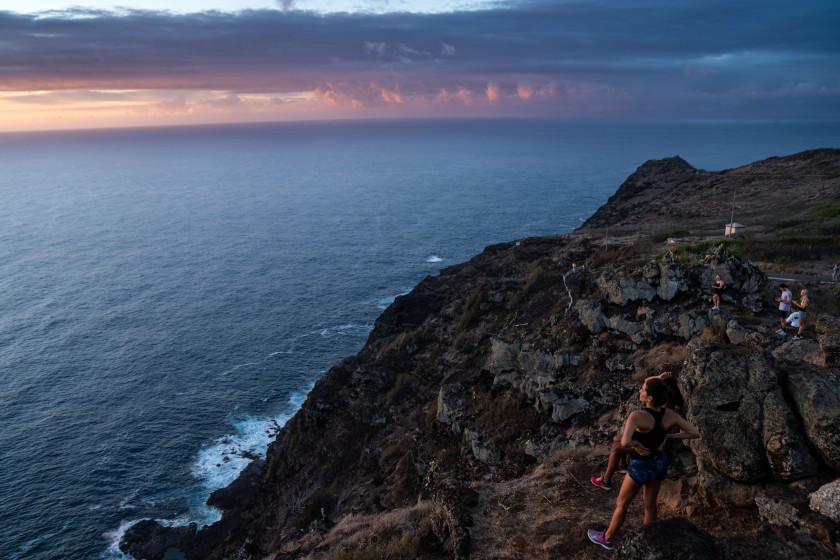 In four days of roaming Oahu in October, Times photographer Kent Nishimura and I found aloha spirit and corona worries as tightly entwined as the roots of a banyan tree.

The deserted halls of the Honolulu airport were a welcome sight Oct. 15, after the startlingly large crowd of travelers in LAX’s Terminal 5, where I boarded a Hawaiian Airlines flight with middle seats empty. (The arrival process, however, now includes an extra step for officials to check your COVID-19 test results.)

Almost all of Oahu’s beaches and most trails are open, as are hotel pools, with restrictions. Surfboard, bodyboard and paddleboard rentals are open. Since late September, most restaurants and retailers are operating at 50% capacity. Most gatherings are limited to five people; bars and nightclubs are closed.

I’ve made half a dozen visits to Hawaii over the last 20 years, and I never imagined I would spend hours searching Oahu looking for tourists and finding so few.

“The streets are so empty. Have you ever seen a college town in summer?” said Matthew Aguilar, who had come from San Francisco.

Every morning, I carried my brown-bag breakfast (the only kind many hotels offer at the moment) to the Waikiki Wall and watched locals swimming, bodyboarding, surfing or hanging out on the mostly empty sand.

Most afternoons I found my way to beaches elsewhere on the island, including the calm waters of Kailua Beach Park, where Popoia Island reposes offshore like a crocodile waiting to snap.

In the lobby of the Hyatt Place Waikiki Beach hotel, desk clerks welcomed guests with free coffee. But there was no place to sit: All the chairs and couches were behind crime scene tape so people could not linger.

When I arrived for lunch at the indoor-outdoor Haleiwa Beach House on the North Shore, I found servers eager to seat me. But before anyone can order, you must share your contact-tracing details, a state requirement for all indoor dining rooms.

At the Waiahole Poi Factory in Kaneohe, I queued up with a dozen other customers to order slow-cooked pork, stewed squid and hand-pounded poi to go. The roadside eatery looked like an ideal place to slip into Hawaiian time and talk story with a local or two.

But not now. A hand-lettered COVID-era sign warned, “No loitering after receiving your food,” so I ate my sack lunch on the hood of my rental car. (I ate my meals outdoors, either on patios or picnic-style.)

How did Hawaii move so fast from island time to “no loitering”?

It might be a matter of bitter experience, said professor Jonathan Kamakawiwoole Osorio, dean of the Hawaiinuiakea School of Hawaiian Knowledge at the University of Hawaii at Manoa.

In the century after the first Europeans reached the islands in 1778, islanders endured “practically a century of one epidemic after another killing native people off,” Kamakawiwoole Osorio said. “We went from somewhere between half a million and 800,000 people at the time of contact to fewer than 40,000 people by 1892.” The epidemics included cholera, measles, whooping cough, dysentery and influenza.

And now that so many have seen what their home is like without 30,000 arrivals a day, he said, “Do we just run back full speed into that economy and look for as many ways as we can to bring people here? Or did we learn something?”