However, in its early days, many stand-up surfers mocked the sport and its first stars.

When Surfer Magazine decided to include a poster featuring Mike Stewart inside a huge barrel in one of its issues, some readers felt insulted.

The 11-time world bodyboarding champion shared his thoughts on the moment that helped change people’s perception of the sport.

Here’s what Stewart has to say about the iconic poster.

“Matt Warshaw, then editor of Surfer, had the balls to swim straight upstream and drop this poster in the height of the torrent of what I am going to call surfing’s era of bigotry.

To give some context, Surfer Magazine was biblical among mostly hardboard enthusiasts. While this poster made legions of underground boogers rejoice, the hate mail quickly followed.

In fact, the response was so overwhelmingly negative, it prompted Matt to do the unthinkable – he ran an entire story about myself.

While the title was pretty silly, I have to admit I was tripping out hard, in the best way – a fantasy is possible.

Four other remarkable people were directly responsible for this unsuspecting chain reaction.

John Severson, the founder of Surfer Mag, who at some point had told Matt that with Surfer ‘he wanted everybody to feel included.’

Tom Morey, who created a craft that allowed me access to this moment. My friend Vince Cavataio who captured this moment and many other of my favorite images.

And Michael Tomson, for whom, had he not been such a solid supporter of myself and Surfer with his Gotcha brand, I am sure this would have never even been a consideration.

From my limited perspective, I have to say we might be in the best era ever for wave riding. More and more surfers are accepting the differences amongst each other.

Less folk give a crap about what you ride or how you ride it, so long as you are respectful in the line-up, anything goes.

This, the true and most traditional spirit of surfing. Its only fitting that the last issue’s cover: ‘We’re In This Together.'” 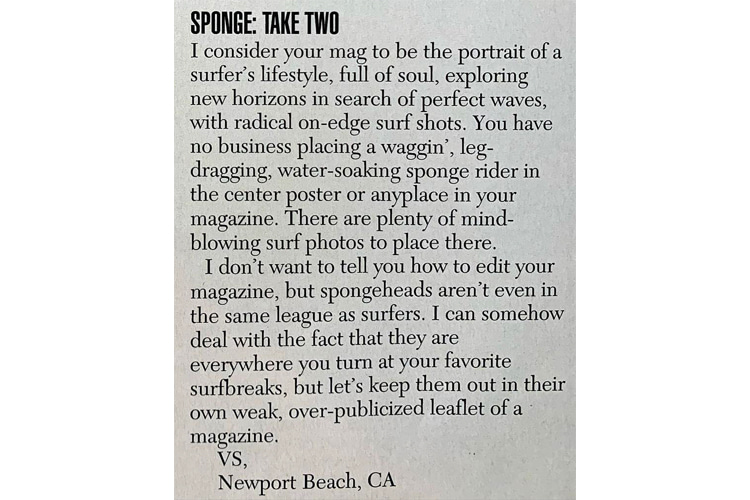 “I Have a Seething Dislike for Those Guys”

In “The History of Surfing,” Matt Warshaw writes about bodyboarding’s difficult years.

“The Boogie was cheap, safe, indestructible, easily transportable, and fun from the moment it hit the water – the surfboard was none of those things.

“Surfers were right, in a way. Novices, part-timers, and tourists would always make up the bodyboarding majority.”

“But within two or three years of the Boogie’s debut, truly skilled bodyboarders emerged, including a handful of media-recognized experts, and they were out there mixing it up with the regular surfers – who generally viewed this new phenomenon not as a form of democratization but as a huge annoyance.

As the number of bodyboarders surged, so did the contempt of most stand-up riders, who, predictably, did their best to let the newcomers know they were second-class.

Surf magazines who dared to publish photos of bodyboarders risked a mailbox full of letters with comments like, “I have a seething dislike for those guys,” and “You have no business placing a leg-dragging, water-soaking sponge rider anywhere in your magazine.”

Mike Stewart of Hawaii, a nine-time bodyboarding world champion who invented a half-dozen corkscrewing aerial moves and rode inside the tube virtually at will, was the only one of his kind to get a pass; like George Greenough, Stewart was simply too advanced a wave-rider to ignore. 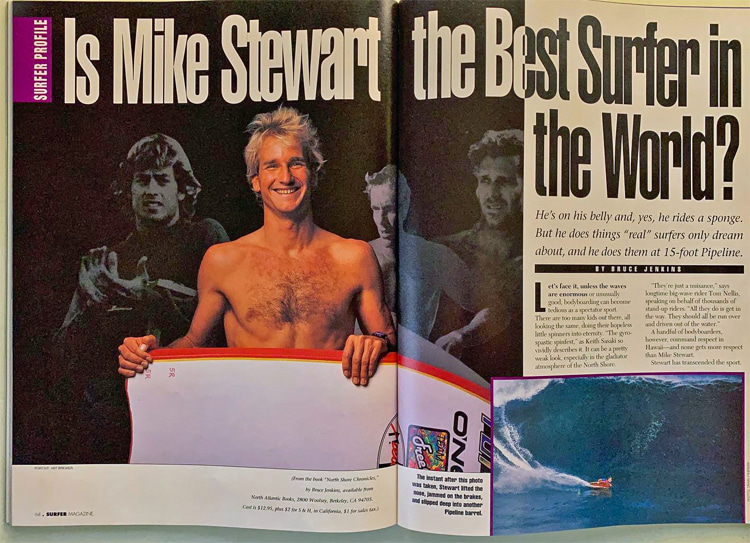 The title for one of his Surfer Magazine profiles was, “Is Mike Stewart the Best Surfer in the World?”

But even Stewart took his hits.

“To answer your question,” a Surfer reader said in response, “No, Mike Stewart is not the best surfer in the world. He’s a boogie fag.”

Bodyboarding’s popularity in America and Australia would peak in the late 1980s, when the sport had its own magazines and professional competition tours.”

It was never really declared as such, but the surfing world eventually made peace with itself, on these terms:

1) bodyboarding will never go away;

2) bodyboarding will never be cool. Not a stance to be proud of, necessarily, but a truce nonetheless.”