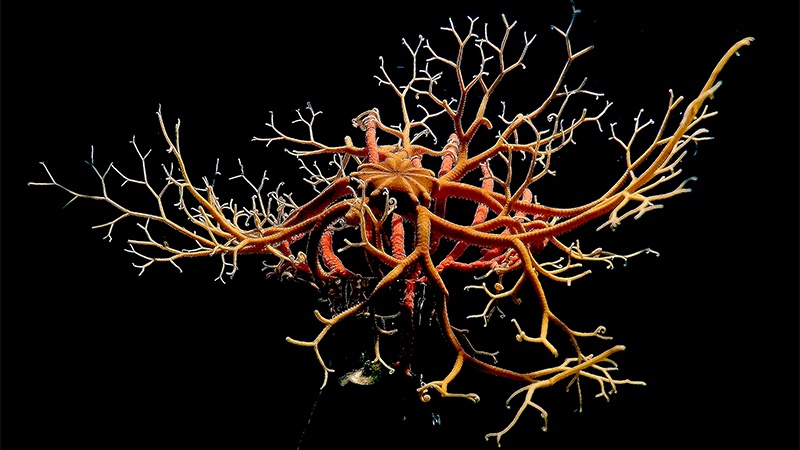 As a University of Oregon marine biology major in 2014, MacKenna Hainey headed to the Oregon Institute of Marine Biology, she thought, to study fish. Instead, she became an expert on the respiration of Pacific Ocean basket stars.

The species she studied, Gorgonecephalus eucnemis, belongs to a class of animals called brittle stars, or ophiuroids, that date to 500 million years ago. A basket star consists of a hockey puck-like central disk, or body, with five branched arms lined with tiny hooks and spines extending outward. It also has 10 pockets, or bursae, that open to the outside at the base of each arm.

“From the start, MacKenna seemed to have a real fascination for basket stars,” said Richard Emlet, a biology professor and Hainey’s mentor at the institute in Charleston. “She was interested in most invertebrates, and she had a great lab notebook of sketches of living animals that we looked at in class.”

For a groundbreaking paper that appeared in the Biological Bulletin, Hainey used time-lapse videography to establish a basket star’s normal breathing rate: one inhale and exhale about every two minutes. The rate increases while feeding and when exposed to hypoxic, or low oxygen, conditions. (An accompanying video shows a basket star’s respiration while feeding.)

As with other aquatic animals, basket stars breathe by taking in water and extracting oxygen from it.

Hainey began collecting basket stars during an offshore outing an hour’s boat ride off Cape Arago as part of an invertebrate zoology course that was taught by Emlet and biology instructor Maya Watts. She began asking questions that prompted Emlet, a co-author on the paper, to suggest she pursue them as her senior honors thesis.

“I had seen pictures and drawings of basket stars in books, but I never thought they would be so incredible to see in person,” Hainey said. “I spent a lot of time in class observing and trying to draw them, which is when I noticed the bursal ventilation, or breathing-like behavior.”

Her observations were intriguing, Emlet said.

“I knew brittle stars could use muscles to expel gametes from their bursae, but I was unaware of any studies of their steady breathing,” he said.

Upon completing her thesis and earning a bachelor’s degree in 2016, Hainey continued to work with Emlet, furthering her research while pursuing a master’s degree.

“MacKenna demonstrated simply but elegantly that these large animals, some easily 30 inches from arm tip to arm tip, ventilate their bodies with disc pumps,” Emlet said. “Normally, these bottom-dwelling creatures hang out on structures, such as rocks or corals, and feed on plankton at depths of 90 feet or more, all along the continental shelf margin into the Arctic.”

Hainey methodically studied her stars one at a time in a 20-gallon aquarium chilled to 11 degrees Celsius, or 52 degrees Fahrenheit.

To study feeding, she blended a smoothie of dried krill with seawater and delivered a fixed amount with a turkey baster to each animal. A typical sequence involved time-lapse video to record behavior as each animal settled into the aquarium, ate, and settled again after a meal.

The videos captured breathing rates that rose from 10 to 150 percent, with a similar increase in water volume moving in and out of the bursae. Increased rates continued for an average of 35 minutes after feeding ended.

To study effects of low oxygen, Hainey recorded normal respiration in oxygenated seawater and then slowly added nitrogen to displace the oxygen. By regulating the aquarium’s airstones, she was able to control and monitor oxygen levels in each experiment.

“I bubbled in nitrogen gas until the hypoxic oxygen level was achieved,” she said. “Then I turned off the gas, covered the surface of the water with plastic wrap to limit surface gas-exchange and filmed 30 minutes of hypoxic exposure.”

In the low oxygen, bursal ventilation rose about 60 percent in 11 animals tested. Interestingly, Hainey said, the increase in respiration rate came with a loss of coordination.

The reduced oxygen levels were sufficient to test how the animals adjusted to the conditions, which, she said, were below that regularly experienced by fauna along Oregon’s coast.

“Most of our basket stars began to show a lack of coordinated movements as the hypoxic exposure neared the 30-minute mark,” she said “It shows just how dependent these incredible animals are on normal oxygen concentrations. Our findings suggest that they might not fare well with increasing, prolonged hypoxia exposure in the wild.”

Hainey grew up in Sutherlin and attended Umpqua Community College before coming to the UO. After earning her master’s degree in 2018, she joined the Charleston Marine Life Center as an AmeriCorps State and National Service worker. She served as a marine science educator and medical aquarist until her contract ended.

In January, she will begin pursuing a doctorate in the Carlson College of Veterinary Medicine at Oregon State University, where she will focus on marine diseases, immunology and potential veterinary therapies for other invertebrate species

“I was born near the coast of Southern California, so as a little kid I spent almost every weekend scrounging around in tidepools or body-boarding in the surf,” Hainey said. “After my family moved to Oregon when I was very young, I found myself still drawn to the water, whether it be fishing in lakes or swimming with salmon in the Umpqua River. The ocean had left an impression on me. I would always try to get to the coast whenever I could.”

The National Science Foundation partially funded the research through a grant to Emlet. Hainey also was supported with funds from the Ford Family Foundation and a Paul and Helen Weiser Memorial Scholarship.

/Public Release. The material in this public release comes from the originating organization and may be of a point-in-time nature, edited for clarity, style and length. View in full .