Earlier this month, a New Braunfels professional wakeboarder and his friends wowed crowds in the downtown area by jumping off and flipping from damns along the San Antonio River.

Graeme Burress, who is a sponsored wakeboarder, said he creates video content from his pop-up shows and aquatic stunts at several lakes and rivers across the nation, using an electric winch, a handrail to tie it on and his wakeboard.

He visited the San Antonio River on Oct. 9 and said he had a “blast” wakeboarding off dams near San Pedro Creek Culture Park and Blue Star.

While technically there is no concrete city law against wakeboarding on the river, “willfully entering the water” is illegal, as well as having motorized equipment — both large or other watercraft — on the river, the San Antonio River Authority told mySA.com.

When asked whether the crew was breaking the law, Steven Schauer, director of external communications for the San Antonio River Authority, said the equipment the wakeboarders used could be considered watercraft, as most electric winches are powered by a vehicle’s electrical system. Burress said his winch is battery powered and can be used without an electrical system when charged.

Schauer said the wakeboarders were also walking in the river while performing the acrobats, which violates the city’s law of no swimming in the river.

“At the end of the day, though, it’s up to the city and the police department to make that determination to issue a citation or not … that aside, it is certainty reckless and irresponsible, and is not what the River Walk, nor the San Pedro Creek Culture Park, was intended to be used for,” Schauer said.

Burress, who moved from Ohio to Texas in 2013, said they run into cops sometimes while out wakeboarding, but added the exchange is always civil, and they will leave if asked. The 29-year-old said he and his friends were lucky they didn’t run into police officers while wakeboarding in the San Antonio River earlier this month.

READ ALSO: I kayaked on the San Antonio River in the King William Historic District, here’s what you need to know

The wakeboarder said he loved San Antonio and plans on returning. He estimated he had an audience of about 30 people while performing stunts on the river for four hours.

Watch Burress and his friends’ wakeboard on the San Antonio River below. 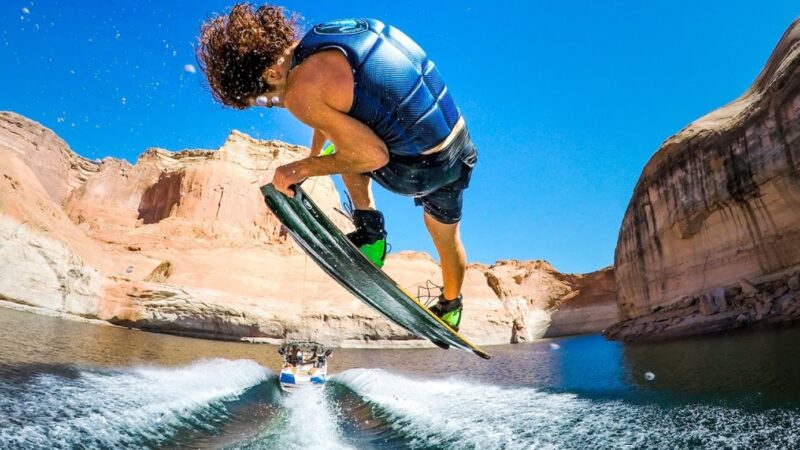