There are two types of tragedies. There’s the sudden kind — a freak accident, a single deathblow, a calamity. And then there’s the long, slow, protracted kind — like a war or a disease. Hurricane Dorian was the second kind. It’s a disease. And it’s still killing.

The first symptoms showed up way back in August, which at this point feels like a lifetime ago. Back then, East Coast and Caribbean surfers weren’t even thinking about Hurricane Season… Well, that’s not true. We were thinking about it — but in a naive, frothed-up kinda way, as we were finally rounding the corner of what seemed to be a much flatter, much hotter summer than usual. Once Dorian metastasized into a Category 5 monster, the prognosis was bleak for the entire region, not yet an echo away from the climatological peak of the Atlantic Hurricane Season.

“Dorian was named back on August 24th when it was still east of the Windward Islands, and two weeks later, the whole Surfline team is ready to put this storm behind us,” said Outer Banks-based forecaster, Rob Mitstifer. “The destruction done, especially in the Northern Bahamas, makes surfing feel minute in comparison. Dorian gradually organized over the Northwest Caribbean and became a hurricane while passing through the Virgin Islands on August 28th, and swell production was underway for the East Coast; however, this initial pulse was meager compared to what came after. Dorian intensified into a Category 5 Major Hurricane and made landfall in the Northwest Bahamas on September 1st with max sustained winds of 185 mph. That tied the all-time record for strongest landfalling hurricane in the Atlantic and absolutely pummeled the islands of Abaco and Grand Bahama. Then it stalled for almost two days over the Northwest Bahamas, about 100 miles offshore of Palm Beach, FL.”

Here are some disturbing numbers, as reported by CNN: “At least 43 people are dead, and officials expect that number to rise dramatically as rescue efforts continue. More than 70,000 people are homeless on Grand Bahama and the Abaco Islands, the parts of the Bahamas hardest hit by the hurricane. Search and recovery efforts in the Bahamas have been slowed down by ravaged infrastructure, after Dorian left behind piles of rubble and splintered homes. A cruise ship brought nearly 1,500 hurricane survivors from the Bahamas to a port in Florida on Saturday. Evacuation efforts continued on Sunday with at least one charter flight bringing people from Marsh Harbour to Nassau.”

We won’t even get into the darker details. The news is all bad.

Read More: Everything You Wanted to Know About Hurricane Season

Swell Signature: Hurricane Dorian
Storm Location and Track: Lengthy track that began in the tropical Atlantic, moved over the northwest Caribbean, and through the western Atlantic
Storm Wind: Max sustained winds of 160 knots with gusts to 190 knots on September 1st
Storm Seas: Satellite confirmed seas of 45 feet on September 8th
Key Buoys: East Canaveral: 16 feet at 12 seconds from the E. East Hatteras: 34 feet at 14 seconds from the SW. Texas Tower: 18 feet at 10 seconds from the E.
Swell Travel Time: Anywhere from six-12 hours to three-four days, depending on location

The long trek back at Ocean Ave, FL. Photo: Mez/ESM

Through all that, Surfline’s East Coast team feverishly posted swell and storm updates to our Dorian Storm Feed, walking that psychomoral tightrope of publishing the score right alongside the scourge. We weren’t alone.

“Talk about a rollercoaster ride of emotions,” ESM co-founder and legendary surf photographer Dick “Mez” Meseroll told Surfline, once it was confirmed that Florida would be spared. “The fear and helplessness of staring at a Cat. 4 or 5 buzzsaw eye-wall heading for Central Florida on every TV station, then waking up in the middle of the night in a cold sweat, my heart pounding, reaching for the remote to turn on The Weather Channel’s 1am update. The horror of watching the Bahamas getting scoured off the map, Dorian then stalling over them for 48 ungodly hours before crawling towards the peninsula again. The praying for the beast to… finally… make… that… turn. And waiting and praying. And waiting and praying some more. Who knows if it was answered prayers or Divine Fate or the Great Gulf Stream myth or high/low pressure systems or Jim Cantore’s over-the-top exhortations that helped squeak that bastard around us by the slimmest of margins possible… But like everyone else in Florida I’m totally exhausted, emotionally and physically. I never want to see another Dorian-type storm in my lifetime.”

As soon as Dorian’s swell cleared the Bahamas’ shadow, nearly every beach on Florida’s east coast from Deerfield to Fernandina saw a brief window, or a full day, or in some cases two days of absolutely pumping surf. The survivor’s guilt got very real for several generations of Florida surfers, who’ve nurtured countless relationships with the Bahamian people after a lifetime of surgical strikes. Basically, the Bahamas are to Floridians what Baja is to Southern Californians.

So, before they even shot a single photo, Sunshine State lensmen Ben Hicks, Nathaniel Harrington and AJ Neste were already committed to selling and/or raffling off prints of any outstanding photos that might result to benefit Bahamian victims.

Pumping Pumphouse, with Oliver Kurtz, Pete Mendia and Nate Behl: “It was a gnarly session, and most of the waves were clamping,” said Mendia of Tuesday’s session at Florida’s heaviest slab. “But when Florida gets this size, you gotta take advantage of it. The heaviest part of the day was dodging all the debris.” Kurtz added: “It’s been an interesting few days chasing Dorian around Florida, Found a fun little window of waves Tuesday on the ski with Nate Behl at the expense of the Bahamas. My thoughts and prayers are with everyone affected by this storm.” Video: @ivy_yin_

“It’s nerve-racking, terrifying and exciting all at the same time when a massive hurricane is headed straight for your home,” said Vero Beach’s Nate Harrington, who scored chocolate barrels from the Treasure Coast to Brevard to New Smyrna Beach. “Days going into this, we prepped our houses, boarded everything up and filled our gas tanks. At first the storm delivered super fun surf to enjoy between all the hurricane prep. Then those days just kept getting longer and longer as we watched the storm park over our neighbors to the east, crawling across those islands at 1mph. It was heartbreaking. We all just wanted Dorian to go away and hopefully make that turn to the north. It was inspiring to see the U.S. kick into gear and get relief aid going before the storm even passed. I’m using all purchases of my photos from this storm to create a little fund to be used towards relief and recovery efforts in the Bahamas.”

“It was hard to enjoy this swell knowing that the same winds that brought destruction, suffering and long-lasting anguish delivered brief moments of happiness to us,” added AJ Neste, who shot a momentous session at Flagler Pier. “It didn’t feel right gearing up to go shoot photos, but in a strange way it felt like it was my duty. Getting back on the beach that started my career, taking this horrible negative and doing my best to develop it into a positive by blessing the young surfers in my community. Any photos purchased from this swell will go to help the people in the Bahamas. Because in situations like this, every bit of love helps.”

After spreading to the Southeast U.S. as a Cat. 2, where it was blamed for 24 tornados and five deaths, Dorian made a violent but non-fatal landfall in Cape Hatteras, NC on Friday — dishing out the worst storm-surge destruction in recorded history on Ocracoke Island, causing significant flooding and damage in Hatteras, and ripping apart piers and other structures in the northern Outer Banks. It made its third and final landfall as a Cat. 1 in Nova Scotia on Saturday, knocking out power to half a million customers before downgrading to a post-tropical cyclone. Dorian is finally in remission.

“Almost all of Florida saw a window of great surf while dodging a bullet, as Dorian remained just offshore September 3rd-5th,” Mitstifer added. “Dorian’s track parallel to, but just far enough offshore, the Florida coast was conducive for strong offshores on the back side of the storm to groom (and knock down) the pumping surf. The Southeast and Outer Banks weren’t as lucky, as Dorian tracked too close to South Carolina to leave much surf, then hammered North Carolina on landfall, specifically the southern Outer Banks, which saw major flooding. Conversely, beaches north of the Carolinas were spared the weather, but got plenty of surf.”

“By nearly all accounts, Saturday, September 7th was about as good as it gets for Delmarva, New Jersey, Long Island, and Rhode Island,” he finished. “Once Dorian emerged off the Outer Banks on Friday morning, it raced to the northeast while expanding in size. That motion kept the strongest wind over the Northwest Atlantic, where a combo of easterly and southern swell of all-time proportions brewed. By Saturday morning, the exiting system left favorable winds and solid surf in the water for the Mid-Atlantic and Northeast. But by the next day, the surf dropped significantly.”

Back in the Caribbean, Waves For Water has mobilized in a big way, along with numerous other government agencies and humanitarian nonprofits. At press time, there’s a lot of boots on the ground doing everything they can, as quickly and efficiently as possible, to begin to pick up the pieces. Surfline compiled a hit list here. Meanwhile, the inspirational stories keep filtering in about blue-collar heroes here, millionaire philanthropists there and all breeds of good samaritans coming out of the woodwork to rally for Dorian victims: buying generators, donating vessels, making food, guerrilla rescues… If only all these heartwarming tales could somehow offset the heartbreaking reality:

Like Katrina or Sandy, Florence or Maria, Dorian will be remembered as a timeline divider — life before Dorian, and life after — like one of those abominable, terminal diseases we’ve yet to find a cure for. And likely never will.

More: Why Hurricane Forecasts Are Better Than Ever

Get access to over 500 cams and detailed forecasts for thousands of breaks around the globe — including up and down the East Coast. Start your free trial to Surfline Premium and we’ll help you know before you go.

Why Bosses Should Let Employees Surf the Web at Work – GovExec.com

Why Bosses Should Let Employees Surf the Web at Work  GovExec.com 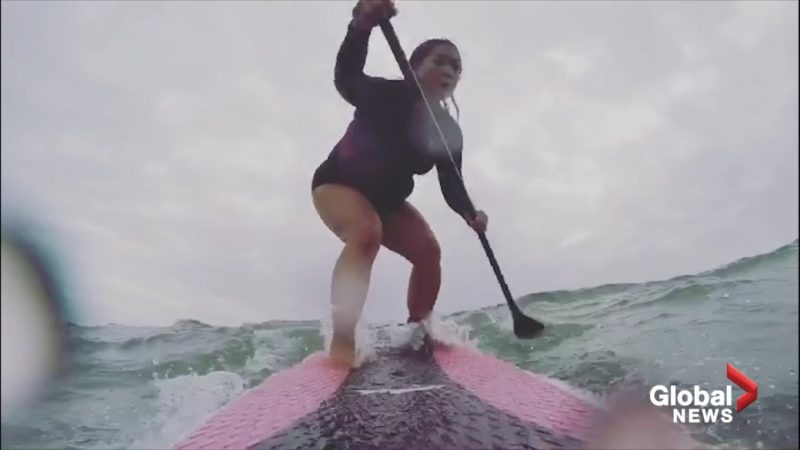