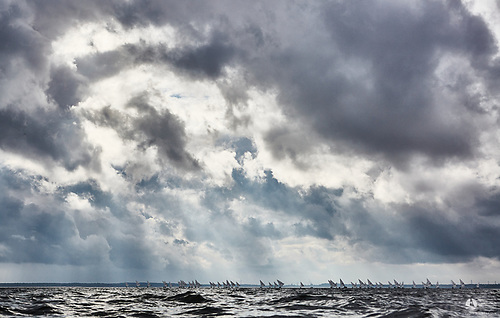 The National Yacht Club‘s Finn Lynch made an impressive leap of 14 places from 42nd after four races to 28th overall this evening to complete the qualification stages of the Laser Radial Europeans on Gdansk Bay, Poland.

Howth’s Ewan McMahon will continue racing in the silver fleet and currently places in 73rd.

All three sailors are still trying to qualify Ireland for the Tokyo Olympics and take one of two final European berths available so this regatta represents an important opportunity before the Olympic qualifier early next season.

“Tricky and variable conditions so far which is visible from the results of the fleet. Tomorrow the real war begins in the gold fleet with the top 50% of the competitors battling it out in the 6 remaining races” – Pavlos Kontides CYP

In the men’s Radial division, Tom Higgins of the Royal St George Yacht Club stays in the top ten of his 30-boat fleet in eighth overall.

The Final series will start tomorrow, where the Standard fleet will be split in Gold and Silver.

The first warning signal for the Standard will be at 11:00.