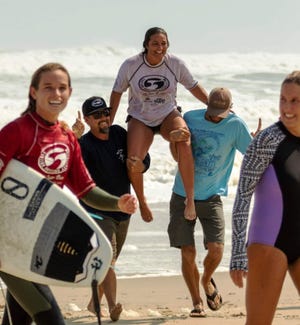 The 28-year-old captured her fifth ESA title in the Women’s Shortboard Division, but her first championship since becoming mother to 20-month-old son Mason.

“This was the first time in more than two years I’ve been north of Flagler Beach or south on Ponce Inlet,” Stephens said with a laugh. “The last time I surfed the ESA (2018), I was pregnant.”

Stephens’ other ESA championships were earned in 2012-14 and 2016. She won the 2017 USA National Championship surfing in Oceanside, California.

“It felt good to be back in the water, back in competition,” she said. “It’s something I’m familiar with. I was a lot more at ease because becoming a mom has been the biggest challenge I have faced in my life. I was super comfortable in the water. I was able to relax a little bit.”

The water was rough during the competition. Stephens said she saw waves in the 10- to 15-foot range in the first day of the surfing event because of the swells caused by Hurricane Teddy.

“There was an outer break, which had bigger waves, and an inside break,” she said. “I took the inside break because I knew it would be hard to paddle out to catch the outer waves. We only had 20 minutes to surf the final.”

Stephens, who organizes Flagler’s MayDay Memorial Surf Classic in honor of her late mother Dollie Sue Watson, caught 11 waves and was able to wow the judges with her skills on the smaller sets.

“My two scoring rides were similar,” she said. “I did a big turn off the top on each of those rides. Some of the girls tried the outside break and either didn’t make it or got sucked into the pier. I guess I can credit my game plan to having made those mistakes in the past.”

Volusia-Flagler surfers scored success after success in the ESA competition, which attracted more than 200 top amateur surfers to Nags Head.

Carl Burger took first place in Junior Men’s Under-18, another first in Open Shortboard and was second in Boy’s Under-16 Shortboard. Burger took home the Junior Ironman Award for his efforts.

Rounding out the locals’ effort was Gus Hultgren, who took home fourth place in the Boy’s Under-12 Shortboard.

Stephens credits the overall showing to a general love for the sport in this area.

“It boils down to the passion our community has for surfing,” she said. “I mean, we had male and female winners. We won in the 12- to 14-year-old divisions on up to the Legends, guys who are 50 or older.

“It’s a shared passion for surfing and the ocean. Our little hub here in North Central Florida has produced some of the top surfers in the world. Why? I guess it’s because we never stop surfing.”