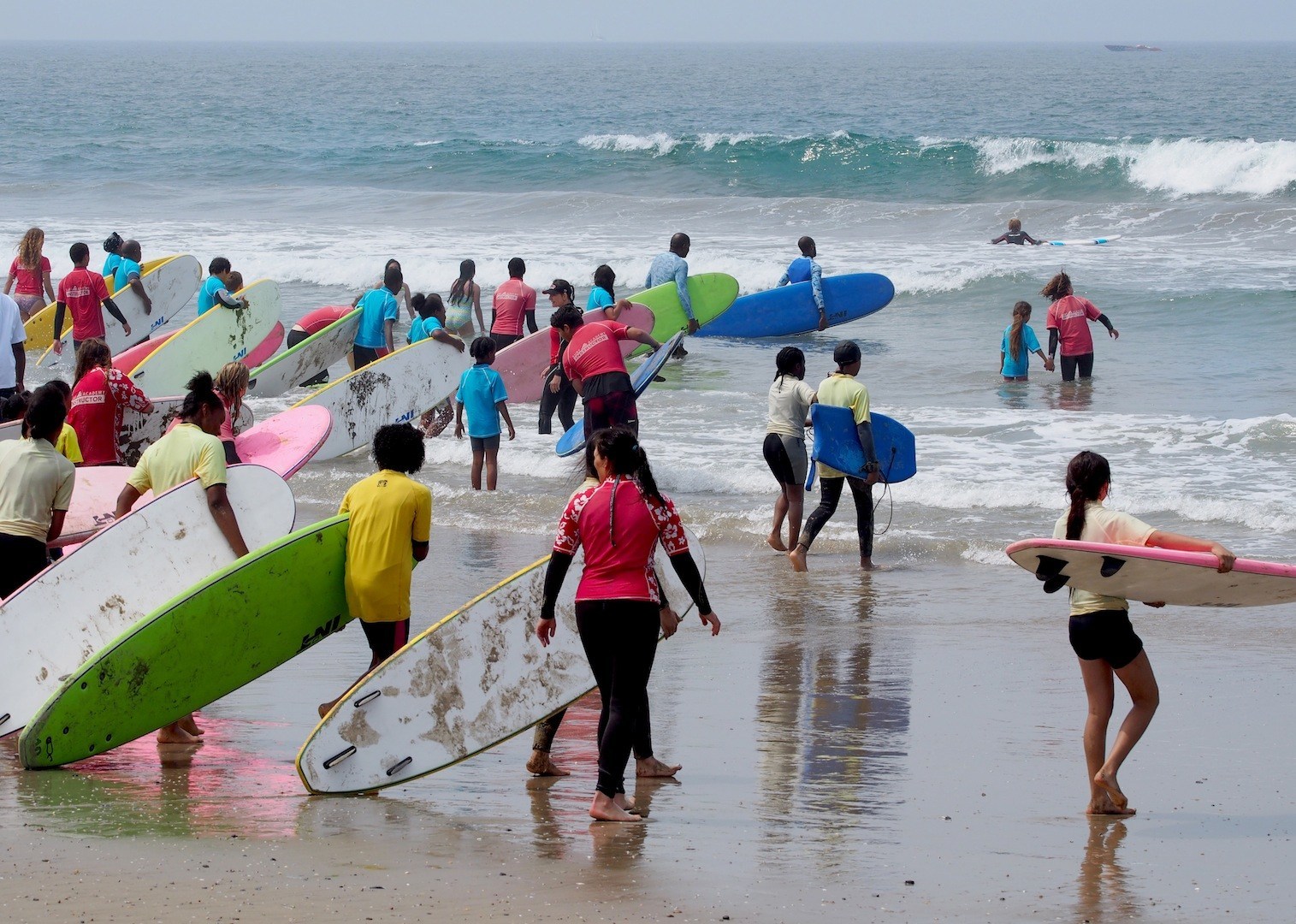 [This article is one of many profiles in a series called “Historial BadAss”, curated by this our friends at Adventure Journal. Be sure to head to their site for more stories about surfers and outdoor adventurers who have made history.]

For the past six years or so, on the first Saturday in June, dozens of inner-city kids venture splashing and laughing into the gentle waist high peaks near California’s Santa Monica Pier to get their first taste of surfing. Many of these kids will have never before even visited the beach. What was once perhaps a far-flung and exotic pastime, surfing, for those kids growing up outside the typical beach community, becomes a touchable, livable activity.

Those kids venture to the coast as a celebration of Nick Gabaldon Day, a feel-good memorial first put on in 2013 by the Black Surfer’s Collective, in partnership with Heal the Bay, a Southern California environmental group, and L.A. County Supervisor Mark Ridley-Thomas. The day is about honoring Gabaldon, introducing kids who wouldn’t otherwise be exposed to the outdoors, and is a reminder that something as open as the beach was once segregated too.

Gabaldon is often considered the nation’s first documented black surfer; whether he was or not is difficult to prove, though he was likely the first black surfer to ride waves at California’s legendary Malibu. Gabaldon was born in the Santa Monica area of Los Angeles in 1927. He loved the beach as a kid, and bodysurfed a stretch of beach along Santa Monica’s Bay Street, also called “Inkwell Beach,” a section of beach that was open to black swimmers when Southern California beaches were still segregated.

Today is Nick Gabaldon Day, but I’m not doing the usual post. On this day, we usually take the time to recognize the first documented surfer of color, an African and Mexican-American, in southern California. We recognize how he overcame overt and subtle racism to surf and pioneer the path to surfing in a time where beaches were segregated. Even the rosy story of paddling 12 miles to Malibu (which, if you think about it, is horrible and a clear example of systemic racism) is celebrated. 🏄🏾‍♂️ . . But how do you think Nick would react to the present if he were here today? How would he react to the reality that beaches and surrounding communities are still heavily segregated? How would he react to swimming and pools continuing to be inaccessible to black children? How would he react to the lynching of George Floyd, despite it being almost 70 years since he last saw this world? 🚮 . . Nick dealt with systemic racism then, and systemic racism is still alive and well in America. HONOR HIS MEMORY by helping to eliminate it. Watch and share @surfearnegra and @actdottv ‘s easy explanation of systemic racism (in her bio). White people – talk to your white friends and family about systemic racism…especially the ones you know have problematic views. Donate to organizations addressing inequitable aspects of our country. Check @joihearts blog (in her bio) on anti-racism resources. Vote to create a more equitable and just society. ✅ . . The time for action is NOW. We will not take an apology and let this conversation wither away. Systemic change NOW. ✊🏾 . . #nickgabaldon #nickgabaldonday #surf #surfing #surfer #surfers #black #blacksurfer #blacksurfers #santamonica #california #socal #racism #systemicracism #segregation

For years, while Gabaldon was attending Santa Monica High School, he’d leave from class and head to the beach, the site of a robust community of black beachgoers, unique to Southern California. He’d swim and bodysurf the waves, and eventually taught himself to ride a surfboard.

Eventually, he caught the eye of local lifeguards who recognized his bodysurfing talent, and he struck up a friendship. The lifeguards, a couple of white guys named Buzzy Trent and Pete Peterson, were budding surf stars, and indeed became titans of the sport during California surfing’s golden age of the postwar years. They were also regular surfers up the coast at Malibu, at the time considered the world’s best surfing wave.

At some point in 1949, Trent invited Gabaldon to come ride the pointbreak waves of Malibu. This was a vastly different proposition than it would be today. Gabaldon, at this point a student at Santa Monica City College, didn’t own a car and didn’t have an easy way to access beaches to his north. Walking was an option, but even though segregation had ended formally along the beaches, he wouldn’t have been welcome strolling across the sand at beaches fronting all-white neighborhoods.

So, he hopped on his surfboard and paddled from Santa Monica. 12 miles, each way, to surf the fabled ‘Bu.

“What better way to access the beach if you weren’t 100 percent welcome to walk across the sand?” said Richard Yelland, director of 12 Miles North, a documentary about Gabaldon’s life (watch, below).

12 miles is a brutal distance to paddle, however. It would be shoulder-sapping to do that once, let alone to make the paddle, then surf long point waves at Malibu, only to make the 12-mile return trip. That Gabaldon was willing to endure that is both a telling indication of how unwelcome he would have been in most of the communities he’d have walked through—it’s also telling how good the surf is at Malibu.

That summer of 1949, for nearly a month, Gabaldon made this 24-mile round-trip paddle daily. Eventually, the white surfers at Malibu realized what he was going through to surf there, and started giving him rides to and from the point. Gabaldon stood out not only because of his color in a sea of whiteness, but also because the dude could surf.

“Race wasn’t really an issue at Malibu,” said Ricky Grigg, a legendary big-wave surfer, who as a teenager surfed the break with Gabaldon. “Nick was perhaps considered more like a Hawaiian than anything else. Everyone liked him. And he was a pretty smooth surfer, too.”

For two years, Gabaldon was a regular face at Malibu in the summer months when south swells roll into the sand-bottomed point broken by Malibu Lagoon. (Malibu, by the way, comes from the Chumash—the indigenous population of the area, who called the point “Himaliwu” which translates as something like “loud surf.”) Each time the swell would show, Gabaldon would hitch a ride with one of his white friends, drive through areas still so unfriendly to black people he couldn’t walk through them, and, for a few hours at a time, escape the rampant racism of Southern California.

On June 5, 1951, Gabaldon was surfing a pretty big day at Malibu, with overhead sets sending waves pinwheeling nearly a quarter mile down the point toward the Malibu pier, where, if a surfer times it right, they can pass through the pier pilings to extend their ride. He caught a wave, rode it clear past the zone where surfers normally kick out to begin a long journey back to the take off point, angling for the pier. Whether he was simply caught up in the joy of riding a perfect wave or was aiming for a smooth slot between pilings, Gabaldon slammed into a piling at full speed and was killed on the spot. He was 24 years old.

Today, the Bay Street area of the beach where Gabaldon learned to ride waves, and which was called Inkwell Beach, fronts homes and business owned almost entirely by white people. As is the case in most parts of Southern California, beach property in Santa Monica is owned by a white majority, with people of color typically living in less expensive communities further east, with beach access a much trickier and more expensive proposition.

Nick Gabaldon Day is meant to address that issue of access, to show kids from communities not typically exposed to the beach that there’s a bigger world out there, and to connect them with the resources they need to explore it.

Without having to paddle 12 miles to do so. 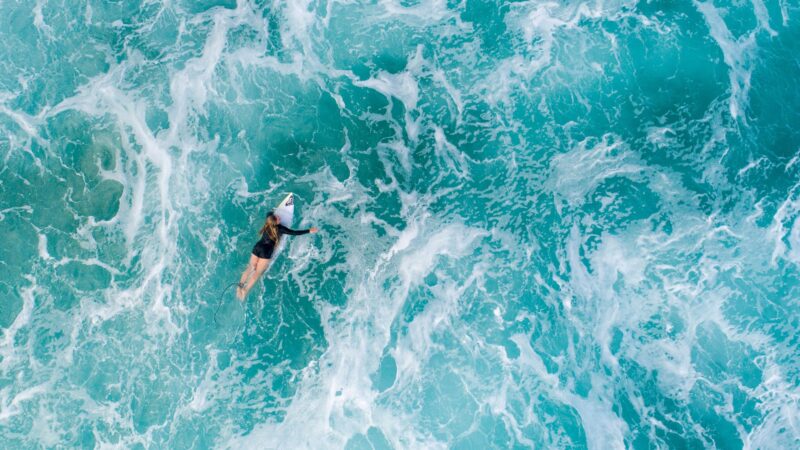 Tokyo Olympics Will Feature Surfing & 3 American Women Are the Best in the World – MarieClaire.com

Tokyo Olympics Will Feature Surfing & 3 American Women Are the Best in the World  MarieClaire.com 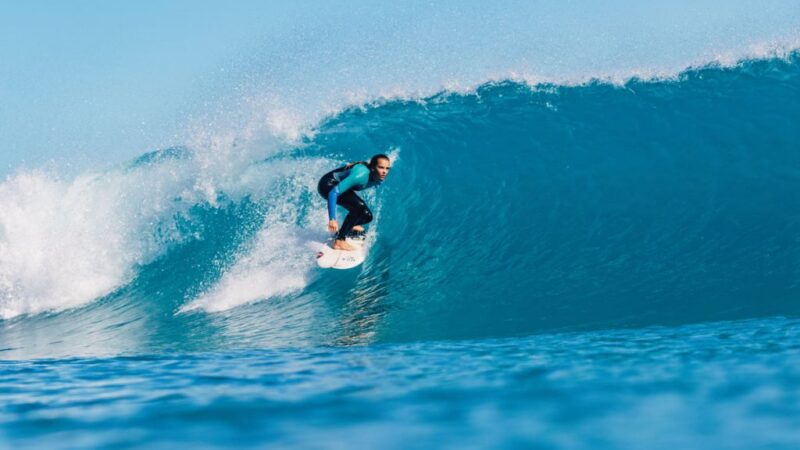