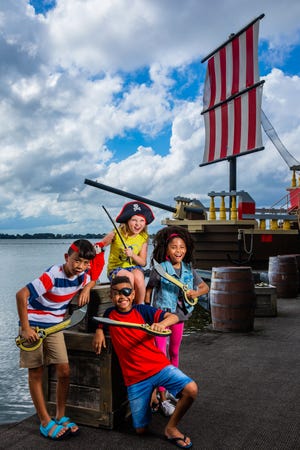 LAKELAND — Legoland Florida Resort commemorated its ninth anniversary Thursday by announcing a slate of promotions and enhancements leading to the theme park’s 10th birthday next October.

The Winter Haven attraction is offering a Play & Party Pass for Florida residents at the “throwback” price of $99. The pass includes free parking, discount tickets for friends and family and access to some special events, the park said in a news release.

The announcement comes as Legoland Florida and other theme parks are reeling from the societal effects of the COVID-19 pandemic. Legoland closed from mid-March to June 1, and a month after the reopening the attraction confirmed cutting an undisclosed number of positions.

Legoland released a list of “top 10 reasons to party in 2021.” The park plans to launch a new water stunt show in February on Lake Eloise, site of the traditional pirate-themed water-skiing exhibition.

In the new show, Brickbeard will recruit young audience members to take part in a stunt school, and the cast will include a new, female pirate character, the news release said. The performances will include wakeboarding, barefoot skiing, jump acts and a ski pyramid, an homage to the shows that made Legoland’s predecessor, Cypress Gardens, a nationally known attraction for decades.

Legoland also announced plans for a new 4-D movie at the Legoland Fun Town Theater and the introduction of a Master Model Builder experience in a building set to open next spring. The park will add a stage show in the Lego City area and plant a series of “larger-than-life” Lego models in the same section.

Addressing the Florida heat, Legoland plans to install shade structures in Miniland, a showcase for Lego-based models of such scenes as New York City, Las Vegas and Kennedy Space Center.

The theme park will debut Piratefest weekends in February, events that will include Lego building activities, character meet-and-greets and a fresh musical show. Lego Friends weekends, based on a group of female Lego figures, will take place in May.

Legoland released photos of a model building creating what the park called “the biggest Lego cake ever” in anticipation of the 10th anniversary next October.