Loon population rising, but not quickly, in both Vermont and New Hampshire – vtdigger.org 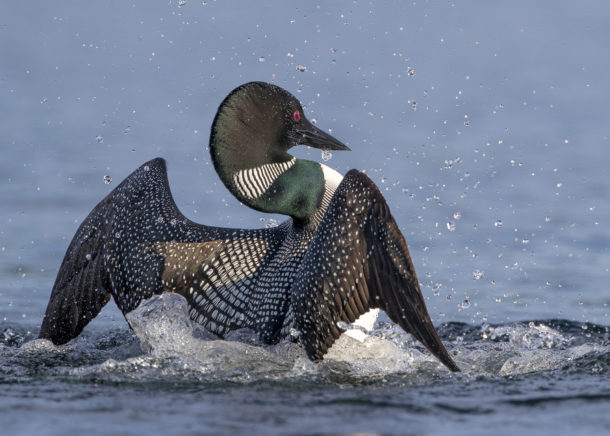 This article by Liz Sauchelli was published originally Sept. 9 in the Valley News.

It’s been a decent year for loons in the Twin States. After years of lead poisoning and habitat encroachment meant an outlook as bleak as the waterbirds’ iconic bird call, things are finally looking up.

“The good news is we set a new record for territorial pairs of loons,” said Harry Vogel, senior biologist and executive director of the Loon Preservation Committee, based in Moultonborough, N.H. “We now have more than five times the pairs of territorial loons than when we started in 1975. It’s a relief to see all our efforts are starting to pay off.”

Territorial pairs — of which there were 321, up from 313 last year — are loons who couple together to defend a particular body of water and have the potential to mate. It does not necessarily mean they will produce chicks. In fact, chick survival rate per pair was just below average this year.

“Our loon population is rising, but it’s not rising quickly,” Vogel said. “This has been a slow and painful increase, certainly over the last decade.”

At the start of the season, there were concerns about how the Covid-19 pandemic could influence the population, particularly nesting loons.

“Everyone I’ve talked to said they couldn’t believe how many boats they’ve seen on the lakes,” Vogel said, and the popularity of wakeboarding has been a concern. “It’s great fun for water skiers and wakeboarders, but not much fun for loons as the waves crash over their nests.”

This year, fishing licenses were also on the rise, leading to concerns that people would be using old lead tackle.

A New Hampshire law banned the sale of lead tackle in 2016 and the Loon Preservation Committee has since started a lead tackle buyback program to encourage people to exchange their lead tackle for lead-free products.

VTDigger is underwritten by:

“We were (preparing) ourselves for a run of loon deaths,” Vogel said. As of last week, four loons in New Hampshire died from ingesting lead tackle. “Sadly there will probably be more before the year is through, but the good news there is we have had worse years for that.”

Loons fared better in the northern parts of New Hampshire.

“Where loons did poorly this year is in the Seacoast region,” Vogel said, attributing that to warm temperatures in the southeastern part of the state. “On the hottest years and in the hottest areas in New Hampshire, we’ve reduced nest success.”

In Vermont, nest failure rates were slightly higher this year than in years past, said Eric Hanson, of the Vermont Loon Conservation Project at the Vermont Center for Ecostudies.

“This year we just saw a lot more abandoned nests and predation,” Hanson said. “Competition between loons is becoming a bit of an issue, which is actually kind of a good sign. As we have more and more loons around, they’re occupying most of our big lakes now, so it might good to see a little bit of a leveling of the population.”

But it isn’t a cause for alarm: During a statewide tally on July 18, volunteers counted a record 365 adult loons. Nesting pairs were slightly lower. It’s not yet known how many loons, if any, died due to lead tackle.

“We’ve tripled the population almost, not quite, in 20 years,” Hanson said.

To protect loons, Vogel said, people should do two things: Give loons space and don’t use lead tackle.

“If we do those two things, loons will be fine in New Hampshire in the near future,” he said. “If we don’t, they won’t.”