A multi-time wakeboarding World Champion, Meagan Ethell is also one of the sport’s bona fide illuminati – literally. It’s evident in her passion for competition, her massive talent on the board but also in her heartfelt desire to make a real difference in the world.

The iconic line of buildings along the city’s Schuylkill River were outfitted in pink lights reflecting brightly into the water. It all provided a fitting and fantastic backdrop to Ethell’s ride on the board as the young Red Bull superstar used the unique beauty of this scene to bring awareness to breast cancer.

The photographs of her ride along the Philly waterfront from renowned photographer Robert Snow will undoubtedly produce inspiration to last well beyond the world’s pink-infused Breast Cancer Awareness campaign, held annually each October and supported full-heartedly by Ethell.

It’s the ultimate combination of things so important to Ethell – her sport, her love of photography and her deep desire to make a difference for those affected by breast cancer.

“The boathouse is really unique especially how they changed the lights (to pink),’’ Ethell, 22, explained, the excitement still evident in her voice days after the shoot. “It was just kind of an idea that developed into something bigger and better. It evolved and turned into a really cool project.”

“The fact that we were able to get the pink lights just really tells the story well.’’ 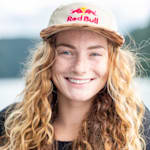 Ethell’s boyfriend and fellow Red Bull superstar, wakeboarder Guenther Oka was on hand for the shoot and – like Ethell – has returned home to Florida genuinely uplifted by the experience. It’s a feeling they hope will be shared by those who see the artistic and meaningful photographs.

“I was like super thankful to just be a part of it with Meg and being her boyfriend I’m a firm believer in the way she rides and everything she does for the sport,’’ Oka said. “She has the opportunity to showcase wakeboarding to more people than just our sport, to reach a broader audience and then also supporting a super good cause at the same time really goes hand in hand with what it’s all about.

“The location was just unbelievable, it has to be one of the most photogenic spots in Philadelphia. And the way the photos turned out too, I would say those are probably going to be the best photos of the year and definitely the most unique.’’

The story these photographs convey is one of hope and strength to those diagnosed with breast cancer and to those loved ones who support them.

It is a bright-light, high impact way for this talented young athlete – a five-time Wakeboarding World Champion and six-time Master’s Champion – to simultaneously share her unmistakable compassion and to also inspire others.

“I think bringing awareness [to breast cancer] is really important,’’ said Ethell, who had for two years previously – before the COVID-19 outbreak – invited breast cancer survivors to join her in Florida for an October afternoon of wakeboarding lessons; a fun and thrilling escape from the diagnosis and treatment so many faced.

“When I first was planning that, obviously I didn’t know much about breast cancer survivors so I was a little timid if I would have many people come out and how the women might react to all of it, but they were all so super strong,’’ Ethell said. “They have been through a lot so they were not afraid to get on the water and it was really empowering for them and myself.

“They were just really so positive and we had such a great day the last two years, just a really empowering time.

What makes Ethell’s passion for this project so unique, is that she doesn’t have any close family members that have ever gone through a breast cancer diagnosis. Yet she recognized the impact and challenge of dealing with the life-altering diagnosis and she decided even at such a young age – to make a difference for those who were going through the emotional experience.

“I don’t have any direct ties to breast cancer but I just love fitness and being healthy and being able to support women; so, I felt like this was a good cause to support,’’ said Ethell, who has been a vocal advocate for breast cancer patients for years.

And by creating awareness, Ethell has the fortunate and important opportunity to help other young people be vigilant about their health too.

“With Meg, the way she’s gone about this project, it will hopefully keep inspiring not just people going through breast cancer and survivors but other women to show they are fully capable of doing anything,’’ Oka said. “Meg’s a testament to that.’’

And what a fitting location – Philadelphia, known as the “City of Brotherly Love” – for Ethell’s important message of love and support to illuminate so brightly.