Mick Fanning made shark documentary ‘to conquer my fear’ – The Age 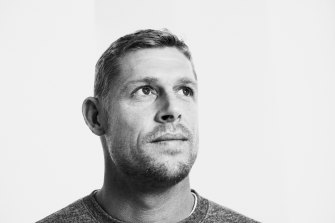 My mum, Liz, is a kind-hearted person. She was strict with us five kids, but fair. She put our needs above her own, which was selfless.

She and my father, John, separated when I was three. I went to Coffs Harbour in NSW to live with Dad for a while. He always cared for my siblings and me, and was present in our lives.

Mum was a psych nurse. We moved from Sydney’s Campbelltown to Ballina and then the Gold Coast for her career – she managed units at a few hospitals. She raised us as a single mum, which wasn’t easy. But she figured if she had a house close to the beach, her four sons would go surfing and stay out of trouble.

Mum drove an old Land Rover. My brothers and I would pile in the back with our boards. Mum would drive us to junior tournaments, go about her day, then pick us up. She’d watch if
she could. Back then, I was getting seconds or thirds. To her, it didn’t matter if we won or lost. She just wanted us to be happy and have fun.

I’m super close to my older sister, Rachel. She’s not into the surfing scene and has her own family. She’s a child psychologist and gives me great advice.

My first crush was probably Mother Nature, as girls weren’t my biggest priority as a kid. But when I was 15, I met a girl at Palm Beach Currumbin State High School. We got chatting and then we dated for a while.

My celebrity crush would be Natalie Portman. I’m a huge Star Wars fan and when I saw her in The Phantom Menace [1999] I was pretty pumped. She’s an incredible actor.

I met plenty of impressive women at competitions. Surfing is predominantly a male sport, but these women stuck to their guns and surfed as hard as they could. Today’s surfers have benefited from people like Layne Beachley, who gave young women, and men, the confidence to follow their dreams.

I tore my hamstring off the bone in 2004. I had six months of rehabilitation with therapist Jan Carton. Jan helped me with my mind. She helped me figure out who I am as a person; if you just surf, you’re not really doing much in the world, are you?

I met my partner, Breeana Randall, through mutual friends. She lived 10 minutes away from my best friend in California. We’d catch up and then, via long distance, love blossomed.

Breeana is super laid-back, but one of her most beautiful qualities is how caring she is for others. She is a speech pathologist and loves kids.

Mum is super excited about being a grandmother to our two-month-old son, Xander: she’s going to spoil him.

I met a young girl called Sadie in 2015. I was in Hawaii, taking part in a Mauli Ola Foundation Surf Experience Day – it’s a non-profit that introduces kids with cystic fibrosis to surfing as a form of therapy. The salt water clears their system and adds years to their lives.

Sadie was seven when we met and was scared of the ocean. She loves it now, which is really cool. She didn’t know who I was, which was awesome. Instead, we connected on a different level and she trusted me. It was really special to return annually and talk about what was happening in her life. We are still in touch.

Following my shark attack at the J-Bay Open in South Africa in 2015, I made the documentary Save This Shark. I needed to conquer my fear and learn about sharks and how to save them from extinction.

That’s how I met world-renowned shark conservationist Cristina Zenato, the “mother of sharks”. She believes that everything is linked – the mangroves, the trees, the food sharks eat and the environment they’re in – and she has to protect their entire environment for sharks to be safe. She cares for sharks like no one else. She was inspirational.

National Geographic’s Save This Shark is available on Foxtel and Fetch TV.

This article appears in Sunday Life magazine within the Sun-Herald and the Sunday Age on sale October 11.