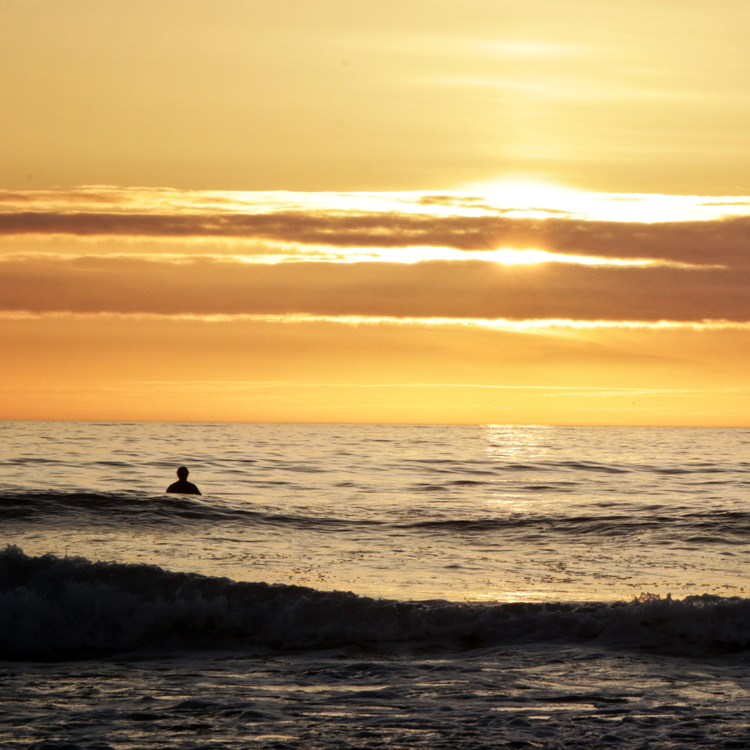 For some people, kindness and generosity have no price tag attached. This is the true story of someone who understood how a simple gesture could mean a lot to a fellow beach lover.

Beaches are sanctuaries of health, places where Nature heals us both physically and spiritually.

I have always felt attracted to the beach from a very young age.

The long, warm summers were certainly the perfect hook, but I learned to appreciate it all year-round as time passed by.

As a surfer, in the last couple of decades, I’ve been trying to follow the ritual and paddle out on International Surfing Day.

So, every year, on the third Saturday of June, I tell myself I need to get wet and pay tribute to a sport that pretty much shaped part of who I am today.

In a self-analysis exercise, I tend to believe that the best of me was molded through surfing, the constant connection to the ocean, and the solitary act of waiting for the waves to appear on the horizon.

But that is of less importance to the reader right now.

Everyone who is blessed to be alive in a year like 2020 knows what a fresh breath of air means in times of isolation, lockdowns, confinement, and physical distancing.

I’ve been one of those who decided to take no risks.

I’ve played it conservatively – not because I was afraid – but because I thought it was the right and wise thing to do, and the best way to protect my family.

Nevertheless, three months after the beginning of the nightmare, I started planning strategic surf sessions in uncrowded surf breaks.

On June 20, at 8:30 pm, I paddled out at Leça da Palmeira beach, an urban stretch of sand on the outskirts of Porto, a stunning and cosmopolitan World Heritage Site by UNESCO.

Leça da Palmeira has an interesting role in the history of surfing.

However, it was a 28-second excerpt that caught a local writer’s attention.

Somewhere in the middle of the black-and-white footage, a group of 12 individuals is seen riding bellyboards.

Because the film was shot between 1926 and 1927, it was considered the oldest known surf film in Europe.

Anyway, nearly 100 years later, I was paddling out with the sun already low on the horizon.

It was late in the day, but the stars seemed aligned.

There was no wind, the waves were glassy, and the water’s surface looked as shiny as silver.

At 8:30 pm, there were a handful of surfers in the water, and the vibes were cool, relaxed, and welcoming.

As I waited for the next set, I observed a giant orange ball of fire, getting ready to hide behind the skyline. “What a glorious day,” I said to myself.

But the best was yet to come – outside of the water.

Around 30 minutes later, I rode my last wave toward the beach. I was happy, and my soul had been uplifted.

In the last minutes of the session, I noticed someone was pointing a camera toward us, the surfers in the water.

So, when I reached the wet sand, intrigued, I decided to ask the photographer a question.

“Hi. Do you think you could’ve taken a photo of me riding one or two waves? I would love to have a souvenir of this wonderful day,” I asked the young man.

“I don’t know. Maybe. I’m not a professional. I am just starting to learn how to take photos,” the man replied.

He instantly began browsing the pictures on his camera and showed me a few. Perhaps I could be lucky.

Apparently, there were some in which it looked like it could be me.

“Listen: In nearly 30 years of surfing, I haven’t got many photos of me surfing. Do you think you could send them via email? I am willing to pay you for a couple of shots. It would mean a lot to me,” I supplicated.

“Sure. But I don’t want money. I’m still learning how to shoot,” the man replied.

I insisted I wanted to pay for the shots he had, as a courtesy. But he kept saying no.

So, I thanked him, said goodbye, and headed back to the parking lot.

As I got to my car, I contemplated one of the most beautiful sunsets I had seen in years – what a day. 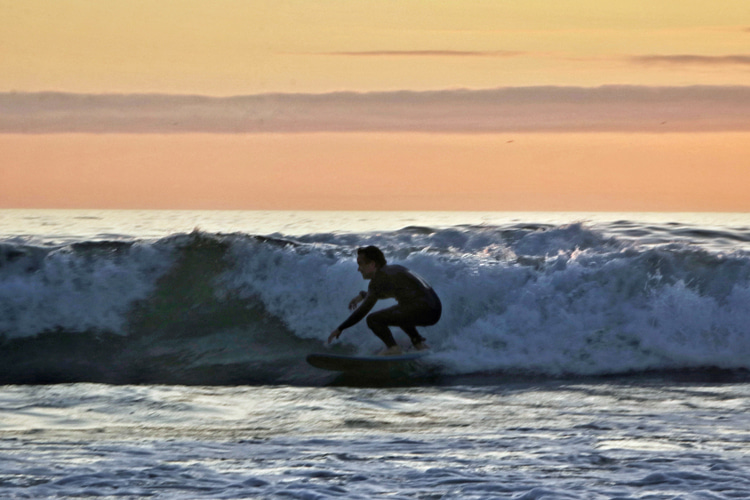 Two days later, at 11:49 pm, I received an email from someone I did not know. The email was sent by Renato Marins:

This is Renato. Is everything alright?

Well, it took me a while, but I managed to check out the photos from that day. They are not very good. I think that of the four sessions I did there, yours was the one with the worst photos. LOL.

Nevertheless, I found a few good ones, and I am sure that’s you in some of them.

If you’re interested, keep in touch, and I’ll show up for another session to try and shoot more. It would be great for me to practice more.

It’s hard to describe what I felt when I opened the folder shared online by this Brazilian guy.

There were three beautiful photos of me surfing with the sunset as a backdrop and a couple of extra shots featuring myself, patiently waiting in the lineup for the next set.

I looked at them for several minutes in awe, like a kid, after receiving the best gift ever.

Soon after, I shared the stunning gift with my wife, surfer friends, and parents, and they all loved it.

I was speechless and immediately remembered the title of a beautiful 2000 movie – “Pay It Forward.”

When I got the picture, I knew I wanted to know more about the man who did not forget that his photos were meaningful to me.

Meet Renato Marins. He was born on the Brazilian coast.

After a long 10-year period living far from the sea, he promised himself that he wouldn’t do it again.

Marins lived for a few months on the coast of New Jersey, in the United States, where he used to ride his bike 40 kilometers to the sea every day.

Now, he’s here, and the promise he had made to himself has been kept.

Renato ended up in Portugal by chance.

Last year, he took a long walk from Rome, Italy, to Finisterre, Spain, through Via Francigena and Via Della Costa, French trails, and the Northern Way.

However, when he was still in Italy, Marins injured his foot and had to cancel the plans as he was not able to touch the floor anymore.

His foot needed, at least, a one-month rest.

Renato had been in Porto in 2015, and fell in love with the city, so the decision to return to recover and try to plan his life was not too hard to make.

His plans certainly include photography and, who knows, maybe surf photography. 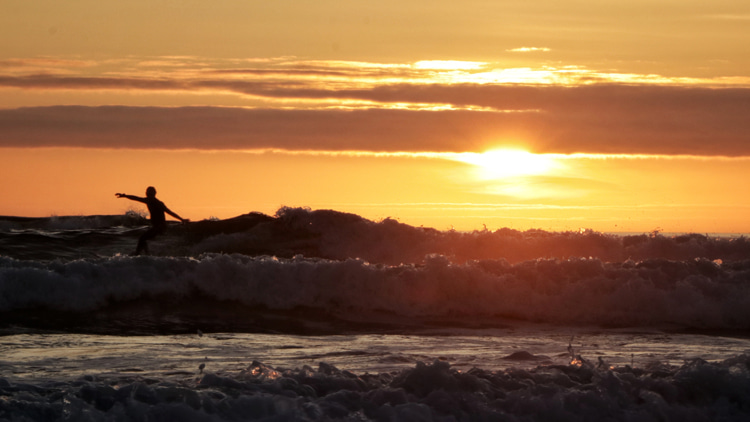 The Brazilian is looking forward to a photography course that allows him to develop the techniques and learn to edit images and videos.

“Today, I live in the hope of not leaving too tired and late from work at the restaurant to ride my bike against this strong and constant northwest wind and enjoy the remaining 15 minutes of sunset,” Renato Marins wrote me a few days later.

“That’s when the surfers’ silhouette is perfectly and anonymously vivid and flecked with gold.”

“I usually say that I express myself better through images than words.”

“Photography is a simple thing – it is just what I see. At least, my photograph is like that. That is why I sometimes do not consider myself the owner of the image.”

“I cannot own your image. You were there, existing, living your moment, and what I did was to see you.”

“It turns out that I managed to put on media what my eyes saw within the limitations of my photographic equipment and my knowledge and skills.”

“I can assure you that the images I was observing outside the lens were much more beautiful than those captured.”

“The interpretation of my photo, of what I am looking at – if it is beautiful, if it is ugly, or if it transmits sensitivity or sadness – will depend on others. Poetry is in the eye of the beholder.”

Renato Marins thinks it was “a bit unbelievable when you said you haven’t got a picture of yourself surfing.”

“It reminded me of a kitesurfer who, after leaving the water, asked if I had taken any good picture and told me it was super difficult for him to get between me and the sun.”

“After I sent him the photos, he replied: ‘I have been kiting for a long time, but I never had such amazing pictures.’ I just couldn’t understand it.”

“I would love to be less shy and reach out to people and offer the photos I’ve taken since they seem to like it.”

And this is a heartfelt tribute to you, my unexpected surf photographer-friend.