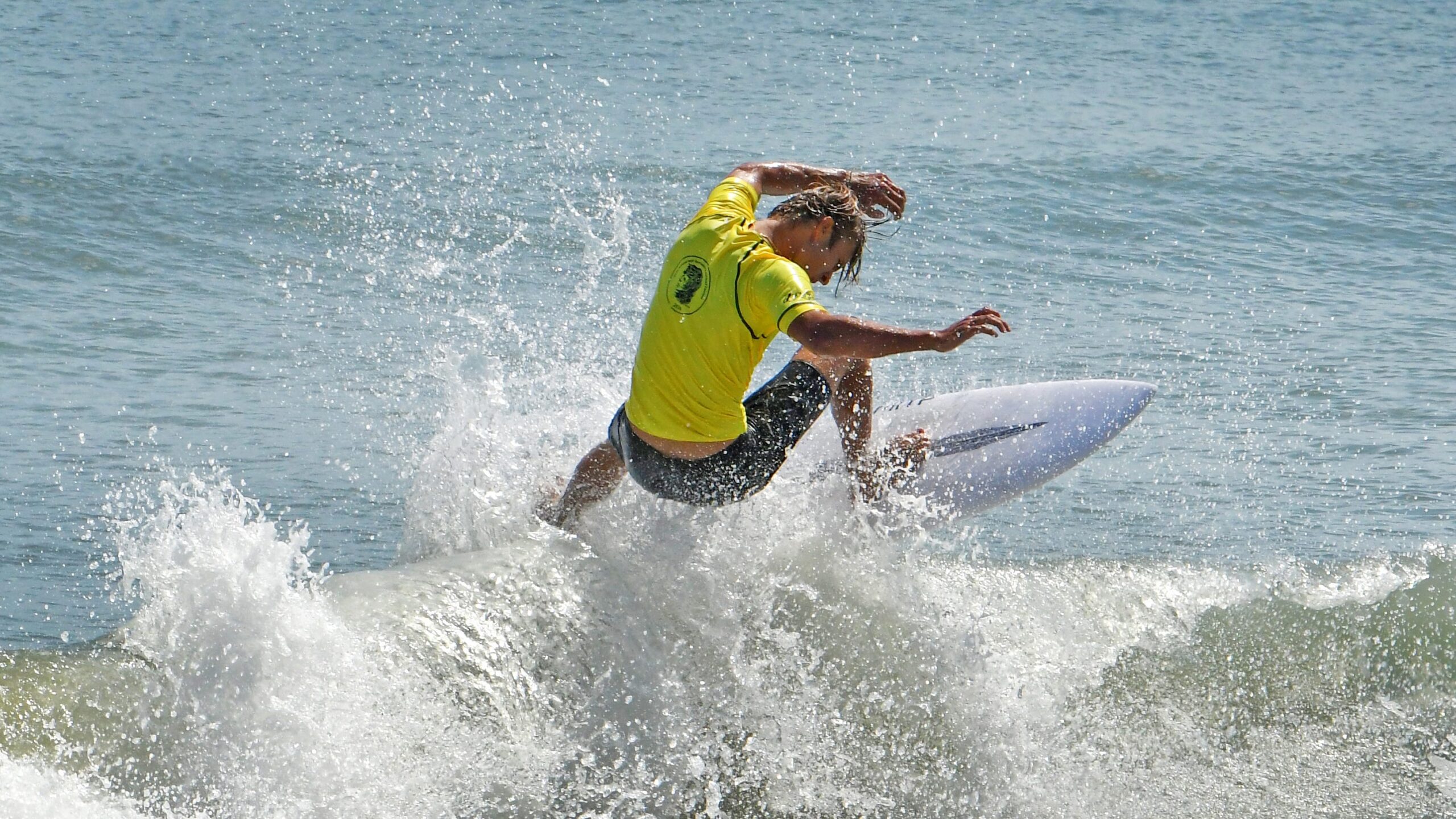 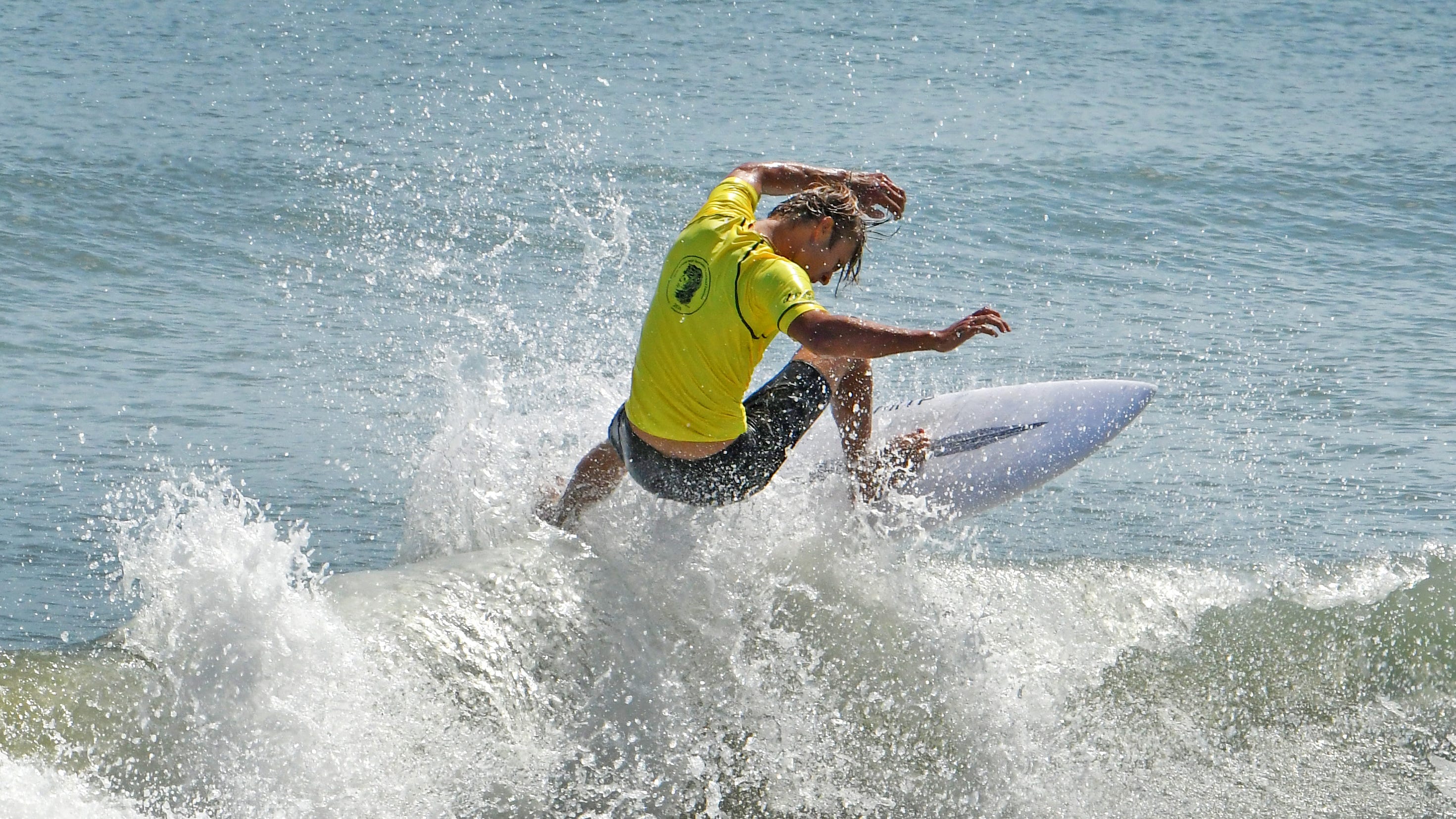 COCOA BEACH — Like a big, happy class reunion, surfers were stoked to be back in the water competing in the 35th annual National Kidney Foundation Rich Salick Pro-Am Surf Festival.

After nearly a seven-month layoff due to COVID-19 concerns, beach-side communities from Cocoa Beach to California were allowing surfing events in their own “bubbles.”

At the Westgate Cocoa Beach Pier, 225 surfers registered for the three-day NKF event, which concluded Monday. That contest had been delayed from its usual Labor Day weekend until city officials gave the OK less than three weeks ago.

“It was good to see all these people on the beach again. We had more surfers this year than last year,” said event host Phil Salick. “Like most parents, the kids had probably been driving them nuts, so I’m sure it felt good to get out of the house for a change.”

Several surfers here were making their first competitive appearance since the Beach ‘N Boards Festival at Shepard Park, the world’s last pro surf contest before the pandemic hit in mid-March.

More:Surfing, running in Brevard: What’s still on, what’s off due to COVID concerns

Indialantic’s Daya McCart said she couldn’t sleep on the eve of the event, feeling “a little nervous” about entering her first pro contest against “some amazing girls” at the age of 12 — one of the youngest pros to compete.

But the 4-foot-11, 92-pound sixth grader at Indialantic Elementary began her pro career with two impressive rides in the 3- to-4-foot foamy surf, stirred up by the residual effects of Hurricane Delta in the Gulf of Mexico. Her scores were good enough to place second (to Abbie Yates) and advance from her four-person heat.

“It was nice to get out there again,” said McCart, who scored a major victory just two weeks ago in the Under-12s at the ESA Easterns in North Carolina. “It’s been very sad that I haven’t been able to compete for awhile, but I just love it.”

In Monday’s Women’s Pro final, New Smyrna Beach rising star Niyah Rosen, 13, who had won the Under-16 title at the Easterns as well as the Junior Ironwoman Award, took top honors in a field that included Yates, Coral Schuster and Kylie Pulcini.

Pulcini, coached by former world touring pro Todd Holland, continued the momentum she had built when she won the Under-14 Easterns title at the age of 12. She unleashed the top score on the NKF’s opening day, an 8.33, scoring three big turns on a long ride into the shorebreak, getting well-deserved applause.

More:Legendary ‘Murph the Surf’ dies, leaving behind a gem of a life after years of infamy

“It’s been fun. I didn’t know how long it would be before we’d get to surf again,” said the Ron Jon team rider who is a freshman at the University of North Florida in Jacksonville. “But I’ve been practicing with some buddies because that’s what we’re supposed to do.”

Speir advanced to Monday’s Men’s Pro final in virtually flat waves, but it was Vero Beach native Tommy Coleman who held off a late charge by Melbourne’s Corey Howell to win the title. With about 40 seconds remaining, Howell unleashed a left backside off-the-lip 360 maneuver but came up just short on the judges’ cards.

Ryan Huckabee also made it to the Men’s Pro final as well as the Junior Pro final, where he lost out to Cocoa Beach’s William Hedleston, a Ron Jon team rider coached by legendary surfer Kelly Slater. Satellite Beach’s Logan Radd placed third.

Among the amateur categories, Indialantic’s Anthony Passarelli won the Senior Men’s title, while his daughter, Kora, 12, won the 14-under title. It was the third straight year both claimed victories in their divisions.

More:An Airbnb for surfboards? How it works and how you can make money

More:Florida women hope to ‘diversify the lineup’ for Black surfers

Veteran pro Mason Sapp, 42, now of Indian Harbour Beach, lost his first-round heat by a tenth of a point, but he had plenty of reason to be happy Saturday morning.

His son, Zealand, 5, was competing in his first surf contest and made it through to the finals in the Polywog division, in which dad had to consistently push him into the surf.

“I was more excited for him,” Mason said. “But it was a good feeling just to be out here again and catch up with friends. It seems like the whole world had been shut off. But what better place to get it back open than here in Cocoa Beach, right?”

Melbourne Beach native Caroline Marks, who will represent the USA in the 2021 Olympics, competed in last week’s 13th annual Nissan Super Girl Surf Pro in Oceanside, California, a team event that featured the top three ranked surfers in the world.

Marks, competing for Team USA, closed out the first day with a comeback win over Tatiana Weston-Webb with a 14.17 heat total.

“It feels good after I’ve gotten so close to winning here so many times, and to come out on top is great,” said Marks, who now lives in California. “(Against Weston-Webb) … I swear I had wave repellent on me. But, I knew it could turn around any moment — especially being a beach break and those waves finally came to me.”

Palm City’s Zoe Benedetto also was among the star-filled cast of surfers.

The event, televised by Fox Sports, was run by ASA Entertainment, an Indialantic-based company.

Contact Grossman at 321-242-3676 or hgrossman@floridatoday.com. Support our work by subscribing to FLORIDA TODAY.