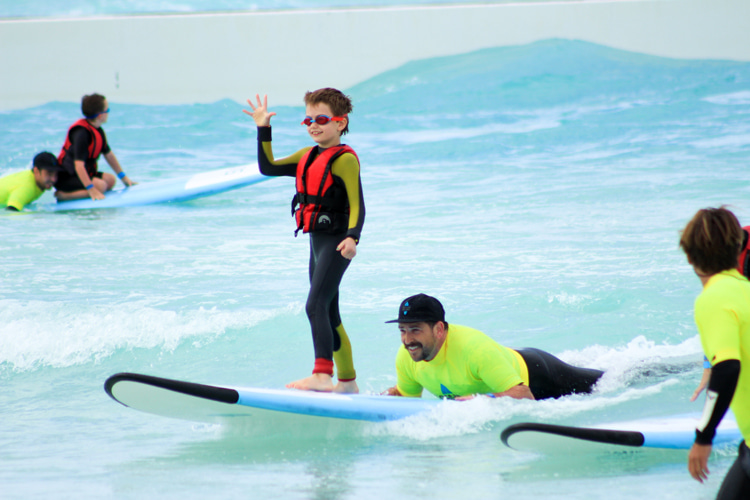 He has been riding waves since he was four years old and that has kept him fit and healthy all his life.

Back in 2012, he partnered with Almudena Fernandez and some close friends to create “Kind Surf,” a non-profit organization dedicated to taking disadvantaged kids and young adults surfing.

“Getting the kids into the water and on to waves has a super positive effect on their outlook. It’s a form of therapy,” explained Aritz.

“We organize sessions at my surf school in Zarautz twice a week. As soon as they get in the water, their faces light up with huge smiles”.

To the excitement of the “Kind Surfers,” Aritz teamed up with the crew at Wavegarden in the Basque Country to organize a surprise surf session at their private demo center.

“When they saw the first waves roll through, they didn’t ask how it was possible to have waves breaking amongst the mountains. They just ran into the water,” said Aritz.

Over the course of the next hour, Aritz and his team of volunteers pushed the surfers into about 8-12 waves each, three to four times more waves than they would catch in the ocean in the same period.

Pro surfers, like Aritz, have long known about the positive impact, both physical and mental, that surfing can provide.

Since 2003, Bethany Hamilton has used her love for surfing to overcome many challenges, achieve some unimaginable goals, and inspire millions of people along the way.

“I think we can all be unstoppable,” said Bethany.

“I have faced many challenges in my life. However, my passion for surfing, along with my family and faith, has allowed me to overcome everything”.

Over the past few decades, sports scientists have started researching water-based healthcare, and the findings are positive.

A leader in this field is the “International Surf Therapy Organization”, a global community of practitioners and researchers that collaborate to advance the use of surf therapy for healing.

Their publications cover a wide range of topics, including how surfing can improve the social skills of autistic children through to how surfing can help war veterans with post-traumatic stress disorder.

Similarly, John S. Payne, mental health expert and author of “What My Eyes Have Seen,” agrees that there is a significant potential for healing by riding waves.

“Surfing is a whole-body experience, the feeling of the water washing over your body, the mindfulness of sitting on your board looking for a potential wave,” notes Payne.

“It brings you into the “now,” taking your thoughts away from anything else and adding to your quality of life.”

Anyone who has ever surfed can testify that it is a physical sport.

After just a few sessions, surfers notice an increase in strength, endurance, and energy.

Over the years, Wavegarden’s engineers, architects, and designers have worked tirelessly to ensure that every aspect of their technology is accessible and safe for all.

Adaptive surfers like Aitor “Gallo” Francesena, who is blind, Iñigo Hermoso and Urtzi Urrutia with Down syndrome, and amputees Eric Dargent and Benoit Moreau have surfed at Wavegarden’s headquarters and validate the quality of the waves and safety of the lagoon.

Beyond the Wavegarden’s private demo center, considerable progress is being made at the public Wavegarden facilities in the UK and Australia.

Inclusion is a fundamental value of the organization, and founder Nick Hounsfield made sure that the plans catered for people with disabilities – from access through to amenities and tuition.

Easy access ramps, dedicated changing rooms, and fully-trained coaches make it possible for everyone, regardless of ability or experience, to get in the water and ride waves.

The slow-moving knee-high waves in the Bay areas of the Wavegarden Cove have seen thousands of beginners catch their first rides, plenty of which have been adaptive surfers.

Louis Sutton, a 19-year-old who has autism, cerebral atrophy, cerebral palsy, and dyspraxia, surfs the zone for experts with flair and style.

The positive effects on Louis’ physical and mental state have been so profound that his physiotherapist now recommends surfing as part of his official treatment. 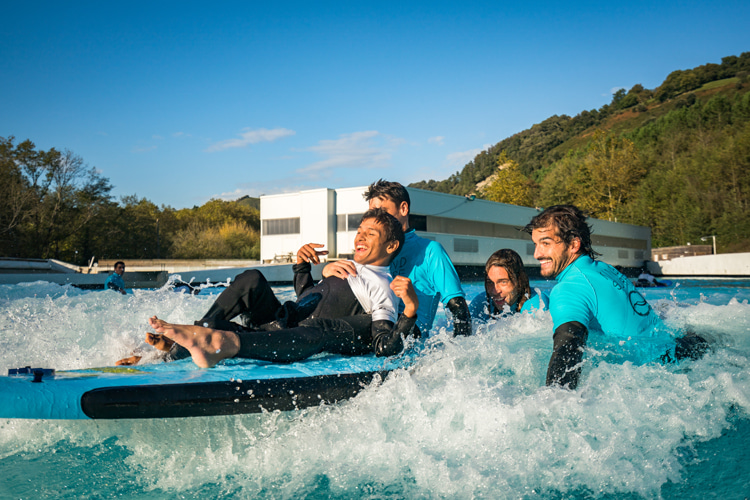 Hounsfield’s desire to see a venue, which is accessible to all, is paying off, and come October 3, 2020, The Wave Bristol will showcase some top athletes during the English Adaptive Surfing Open.

However, this will not be the first adaptive surfing competition in a wave park.

Back in 2019, the Welsh Adaptive Surf Championships bought together 24 surfers from 13 different countries at Adventure Parc Snowdonia in North Wales.

In the Southern Hemisphere, Australia’s Ocean Heroes, a non-profit organization based in Perth, has organized surf sessions for over 3,000 children with autism.

The objective of Ocean Heroes is to share the thrill and wonder of surfing to enable them to build self-belief in a supportive and fun environment.

“There’s a demographic of our society that misses out on going surfing through no fault of their own, although they are physically capable of doing so,” said Luke Hallam, co-founder of Ocean Heroes.

Julie Baker attended the session at UrbnSurf with her three autistic children.

She finished the day with elated children and a strong appreciation for the controlled conditions and close supervision found in the Wavegarden Cove.

“My children said it was much better than the beach because of the clear water and predictable conditions. The environment helped settle their nerves and anxiety; it was truly a perfect session”.

The experience made such a strong imprint that Julie wrote a message to Adam Lamond, one of several key organizers.

“Thank you from the bottom of my heart, from a mother who is currently crying with joy in appreciation of a donation made by strangers that hugely impacts my gorgeous children.” 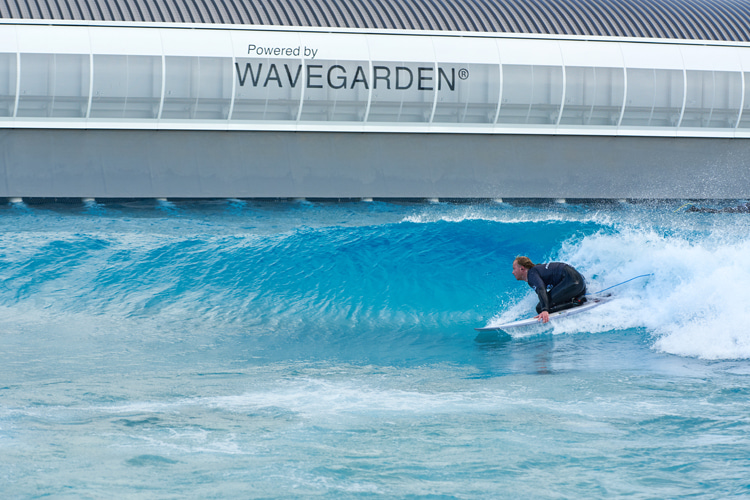 Some medical practitioners have been advocating the benefits of surfing for years.

Dr. Guillaume Barucq, based in the seaside town of Biarritz, France, gained mainstream media attention when he became the first GP in the world to prescribe surfing as a treatment for certain chronic conditions.

When he’s not insisting that his patients with conditions like cystic fibrosis, depression, back pain, heart disease, diabetes, obesity, or cancer, hit the waves, the avant-garde doctor is frequently seen in the lineup himself.

Back at Wavegarden’s headquarters, Josema Odriozola, founder and CEO, is more than satisfied with the direction things are going.

“I am proud of the work our team and our partners are doing to improve access for adaptive surfers. There are many organizations doing inspiring work in surf therapy, and I am pleased to know that Wavegarden can play a key role in offering a safe and controlled environment for all surfers.”

In spite of dilemmas currently facing the world, the good news is that new Wavegarden facilities will be fitted with the latest features for adaptive surfers while offering great waves for surfers of all experience levels.