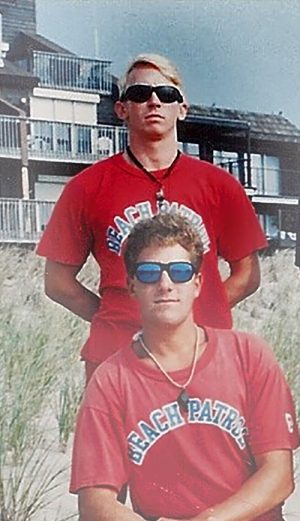 (Editor’s Note: The following is a series on the men and women who have spent their summers protecting all those who came to Ocean City for fun and safe vacation.)

OCEAN CITY – If I start to look back at nearly 30 years of public service and rescue work, I have to look back to where it all began: Ocean City.

Spending summers in Ocean City was something that I had done almost all my life. During the summer of 1991 while I was out bodyboarding, I assisted in the rescue of multiple victims. I remember that a person drowned in that incident.  That had an effect on me and made me want to take my ocean knowledge and help save lives.  Being reasonably athletic, and loving the ocean, I understood it well enough to go out in some pretty wild surf. I decided to take the plunge and try out for a job with the Beach Patrol.  I spent that winter swimming at the pool at Towson State to get ready for the test which took place in 50-ish degree water on a cold and rainy day in May. With the school year finished, I joined the OCBP and headed straight into rookie school where I met people who would become lifelong friends.

I was sent downtown to Crew 3 for my first day of “On the Job Training” during a very stormy day.  The crew was “pulled back” on the boardwalk due to the weather. They sent me running up and down the boardwalk to keep people off the beach. They wanted to make sure I didn’t have a problem talking to people and explaining why they shouldn’t be out on the beach in a storm. All the while they tried to stay dry as the only issued rain gear we had were small yellow ponchos that barely covered half your body.

One particular day, I felt like I never sat down on my stand. There was a strong longshore current running, and people were getting dragged towards the 9th Street jetty. Crew 3 made rescue after rescue that day, even as we tried to warn people. If beach goers got in the water past their knees, they would get swept down the beach to the rocks. I might have made 20 rescues that day, with the guys on either side of me making nearly that many as well. I had to swim several people further out to sea so I could take them around the seaward side of the jetty before coming back to the beach.

The beach patrol was in the midst of an exciting transition in early 1990’s. The wild past was fading away, and a new professional spirit was emerging. I was very committed to my daily work on the beach. Crew 3 worked a section of beach that was busy, with two large jetties in our area. I got in the habit of being there early, because you needed to be sharp and ready every day.

I would spend my entire OCBP career in Crew 3 (1992-1994) and sat next to the 9th Street jetty for two summers. When I go back to visit Ocean City, I still try to spend some time on the beach and in the ocean in that area.  It’s that much of a part of my Ocean City experience.

Stankis currently works for the Maui Fire Department in Hawaii. When he’s not busy saving lives, he can be seen in the ocean doing what he loves — surfing, diving, swimming and pursuing his passion for ocean photography.