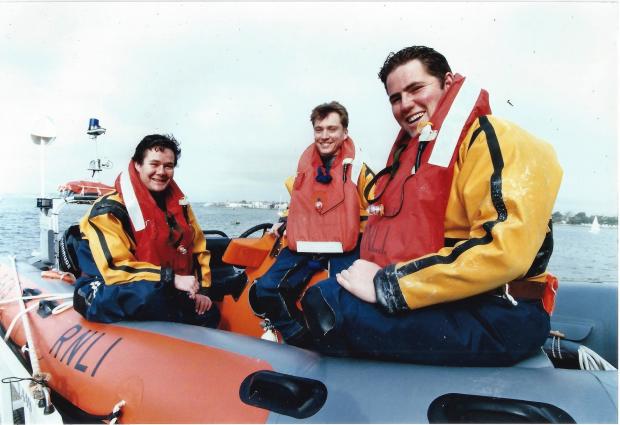 A MAN from Barton whose life was saved by a lifeboat crew from RNLI Mudeford as a teenager, has raised over £1,000 for the lifeboat service.

On October 30, 1994 RNLI Mudeford launched in severe weather conditions to assist a 14-year-old boy in serious risk of drowning at the rock groynes near Barton on Sea.

Twenty-six years later, Iain Hunter, the young boy whose life was saved by the lifeboat crew, has raised £1,100 for RNLI Mudeford, as well as donating the same amount to Dorset MIND.

I know the RNLI are a wealthy charity, however, this year, their fundraising has been drastically cut and so it seems a good time to try and give something back

In a post written on his JustGiving page, Iain said: “In my early teenage years, I had decided I was a ‘surfer’; in actual fact I was a windsurfer, for which my passion began when I was 13.

“Since then, my life has been shaped by my continued love of the sea and watersports in general.

“One of the key reasons this has even been possible is thanks to the RNLI, who saved my life when I was 14.

“I got into trouble bodyboarding in a rough sea and the lifeboat crew saved me from getting pushed onto a rock groyne.

“Twenty six years later and I haven’t needed them again, but I know plenty of the windsurfing community who have, and we all know that the volunteers that man the boats wouldn’t think twice about heading out to save us if required.

“I know the RNLI are a wealthy charity, however, this year, their fundraising has been drastically cut and so it seems a good time to try and give something back.”

This was not the first time Iain has raised money for RNLI Mudeford. Seven years after the rescue when Iain was 21 he did a skydive and raised £1000 for the lifeboat station.

Records from the lifeboat station show there was a force six wind, very rough seas, driving rain and a two-metre swell continuously crashing on the Lifeboat and the RNLI crew in the water helping Iain.

The RNLI Mudeford crew members Ian Parker, Stuart Ward and Toby Abbott all received Royal National Lifeboat Institution awards of Thanks on Vellum for their efforts in saving Iain’s life.

Copies of these awards still hang on our RNLI Mudeford Lifeboat station walls.

On Sunday September 13, Iain Hunter and his daughter Tilly visited RNLI Mudeford Lifeboat station to present two of the crew who saved him, Ian and Stuart, with the cheque.

“There can be very serious rip tides and undertow currents at both Barton on Sea and Chewton Bunny, these are never visible above the water.

“If you see sea conditions that look perfect for your watersport and no one is on the water, stop and ask yourself why, before going into the sea and seeking advice from a local club.”