How parkour’s creative culture withstood a decade of controversy – Inverse 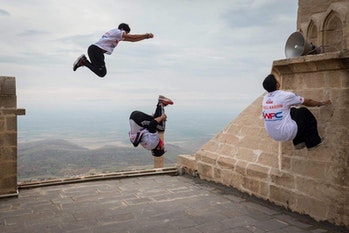 Of course, Victor Bevine has seen the episode of The Office where Michael Scott and Dwight Schrute attempt parkour. The first time Bevine saw it, the year was 2009 and he was on an LA-bound plane with six of the sport’s top athletes on business for the World Free Running and Parkour Federation (WFPF).

“Everyone brings this up,” he tells Inverse. “We were laughing hysterically, so I think it’s good-natured.”

It’s not surprising that a clip of Steve Carell rolling around an office didn’t ruffle feathers. Bevine, the founder of the for-profit WFPF and the non-profit International Parkour Federation (IPF), had bigger things on his mind.

Bevine was flying to LA to shoot one of the most famous (or infamous, depending on your perspective) TV programs about parkour that would premiere that same year: MTV’s Ultimate Parkour Challenge.

The MTV show was the product of Bevine’s obsession with parkour, which he discovered while listening to an NPR radio segment. The movements were captivating, as was the message behind them. At the time he had been working with disadvantaged kids for 15 years.

“What really struck me was the kids were getting the message that by overcoming physical obstacles they could overcome other obstacles as well,” he says.

The next day Bevine hired a cameraman off of Craigslist and filmed a parkour “jam” in Riverside Park in Manhattan. He then contacted Francis Lyons, a friend and TV producer responsible for MTV flagship shows like Made.

Years later, Bevine was flying to film the best parkour athletes in the world jump off buildings and flip over walls for MTV.

The show premiered in October 2009 and has since become a pivotal moment in the history of parkour. The WFPF states that it garnered “the largest audience of any parkour event” with 3.5 million viewers. When it was announced, it also sparked a backlash in the parkour community.

“We got hate mail,” Bevine says, but notes that, once the show aired, some of that tapered off.

“Like with anything, it’s been a struggle to unite the community,” he reflects.

He describes parkour as a sport that is about creatively overcoming obstacles. Sometimes those obstacles come from the outside community – parkour is locked in a “sports politics” battle to remain independent from gymnastics, Bevine says. Other times, as was the case with the MTV show, some fear the sport is drifting into daredevil territory while losing sight of its spiritual side (a lasting criticism of the show).

Bevine, though, says the philosophy hasn’t changed, even after the in-fighting and battle against capital-g Gymnastics.

“It’s not about going out there and breaking your neck,” Bevine says. “It’s really about, step by step, learning to expand your vocabulary of movement so that you can approach obstacles in a creative way.”

What makes parkour a sport –  The athletic feats achieved by parkour would make it a sport by default. Unlike other sports that are defined by their competitiveness, parkour has treated competition carefully – it was never part of the sport’s core mission, Bevine explains.

There’s room to be competitive now, and the results can be breathtaking displays of the sport. As an example, Bevine points to the first World Championship held in Mandarian, Turkey in 2018. That was held on the ruins of a 14th-century madrassa.

However, parkour is about mindset, not acrobatics.

The emphasis on the mindset is perhaps why the sport can’t bear to exist as a subset of gymnastics.

In 2018, the International Gymnastics Federation (FIG) voted to make parkour a sub-discipline of gymnastics. The FIG aimed to make parkour an event in the 2024 Olympics in Paris. Parkour advocates likened Gymnastics’ efforts to a “hostile takeover” that had been in the works for years and was incompatible with their culture.

“It’s a culture of free expression.”

Bevine, also the president of the non-profit International Parkour Federation, says he was opposed to being “gobbled up” by gymnastics from the outset. He sent FIG letters and refused to take meetings. That was, at least, at first.

Eventually, though, he did take a meeting in 2017. Bevine traveled to Lausanne, Switzerland with three “non-negotiables:”

Eventually, the two groups signed a memorandum of understanding (MOU), which is the first, non-binding stage of negotiating a contract.

“They said all the right things in the room,” says Bevine. “But then, when push came to shove, they didn’t agree to any of it. They didn’t follow through on any of it.”

The MOU has since expired, and Bevine is still adamant about maintaining parkour’s independence. A union with gymnastics, though the sport carries the Olympic pedigree, is seen as a culture clash that threatens the mindset of parkour.

That mindset may be more than a gut-feeling. A 2007 study done on 92 parkour athletes and gymnasts noted that parkour athletes do tend to “seek more sensation” than those who did gymnastics. The parkour athletes also had a “more narcissistic personality” and expressed more leadership, the paper notes.

“It really is a mind-body sport like other martial arts, like yoga, because it’s about you versus your personal best on that day,” Bevine says.

He often mentions Ryan Doyle – a legend of the sport, says Bevine, who was sent all over the world as an ambassador with Red Bull. There’s Daniel Ilabaca, also a founding athlete of WFPF that Bevine calls “extraordinary.” Then there’s Joey Adrian, who WFPF’s website calls an “absolute phenom.”

Those candidates are perhaps skillful enough to warrant the honor, says Bevine, but they can’t quite command the cultural power that Jordan wielded. Parkour is still waiting for an athlete like Michael Jordan or, perhaps a better comparison from the world of extreme sports, Tony Hawk.

“Yes they’re great athletes, but they also now have the force of the media behind them. We haven’t had that moment in parkour,” says Bevine.

The spirit of parkour – Parkour has many origin stories. Some begin in France in the 1990s. Then there’s the pop culture arrival of the sport in the early 2000s (see the parkour chase scene in Casino Royale) or with MTV. The oldest piece of folklore however, and the one championed by Bevine and the WFPF, takes place during a volcano eruption on Martinique in the early 1900s.

As the volcano exploded, a French naval lieutenant by the name of George Hebert was tasked with evacuating 700 indigenous islanders and French colonists. The Europeans looked for well-traveled routes that were being obliterated. They fought against their environment.

The experience had a profound effect on Herbert, who concluded that Europeans had forgotten how to move with creativity. His ideas, while rooted in colonialism, did take shape to form a training discipline that underlies parkour, called “the natural method.” The cornerstone of it all is creativity.

“It’s not just being daredevils,” emphasizes Bevine. One of the earliest mottos in parkour was ‘be strong to be useful.”

NOT SPORTS is an occasional series from Inverse. Do you have something that’s not a sport but almost a sport you’d like to see featured? Fill out a suggestion form.