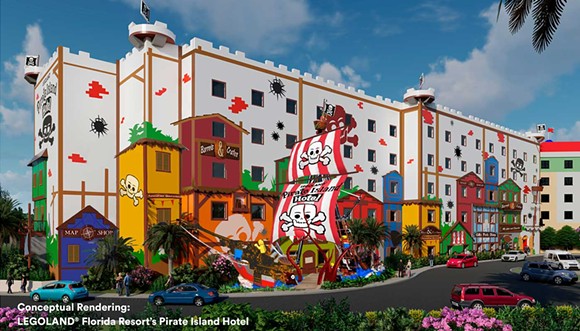 Florida’s tourism industry may still be a long way from recovering from this year’s downturn, but that hasn’t stopped Legoland Florida from announcing an awesome 10th anniversary celebration coming up in 2021.

Merlin, Legoland’s parent company, has found success with its parks via a constant stream of updates and revamping, adding new attractions and refreshing older content. That model can be seen in the company’s 2021 plans for its Polk County resort.

A new 4D movie will debut in the Fun Town Theater next spring. The LEGO City section of the theme park will feature a new stage show and “larger-than-life” LEGO models. A Master Builder Experience will be introduced in the spring at the park’s new LEGO-building Center.

The Winter Haven attraction will also finally be adding shade structures to the Miniland section, home to LEGO re-creations of famous sights from around the world, including numerous Florida landmarks.

One of the biggest changes will occur on Lake Eloise, home to the park’s pirate-themed ski shows. The all-new Brickbeard’s Watersports Stunt Show will debut on Feb. 12, 2021, featuring a new female LEGO pirate character, new original music, and “gravity-defying stunts including wakeboarding, barefoot-skiing, jump acts and an iconic ski pyramid,” according to a press release and video shared by the park.

The water ski shows on Lake Eloise are a historic aspect of Central Florida tourism, dating back to World War II when bored soldiers visited Cypress Gardens looking for water skiers they saw advertised in a local newspaper. Many of the techniques used in the new show were first devised on that same lake and Merlin’s water ski team is among some of the best water skiers in the world.

Legoland plans other special events throughout 2021, including LEGO Friends Weekends on the first two weekends of May 2021.

Next summer will see a new summertime celebration, and the park plans on hosting an “Awesome 10th Birthday Party.”

LEGO Master Builders are already constructing what will be the world’s largest LEGO birthday cake in honor of the occasion, and the park claims this will be “the biggest, most awesome Lego birthday cake ever created.”

Legoland Florida’s annual passes will revert back to their initial 2011 price point of $99, and deals at the resort’s three onsite hotels are also expected throughout the year.

_
Please follow CDC guidelines and Orange County advisories to stay safe, and please support this free publication. Our small but mighty team is working tirelessly to bring you news on how coronavirus is affecting Central Florida. Please consider making a one-time or monthly donation. Every little bit helps.