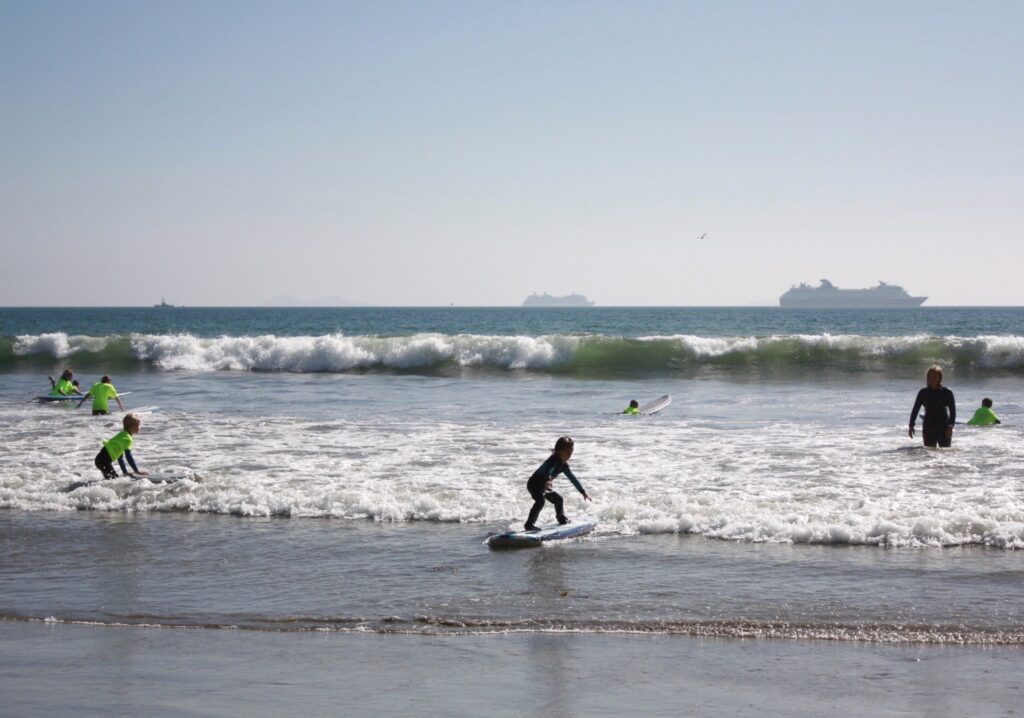 The Coronado Middle School & K-5 Surf Club is a saving grace, especially these days — as well as reaches far and wide, including a surf team and this year connecting youth in kindergarten through fifth grade.

“So really it’s a K-8 surf club with a middle school surf team,” said Heidi Iverson, one of the active parent volunteers who helps coordinate the effort. “We have so many parent volunteers, it’s lovely … We ask for eight parents on the beach every practice and we get them.”

Mike Gillard coaches for the high school but has helped with the middle schoolers as well, Iverson said. She noted Gillard’s competitive drive but how he has a really good time with the younger students when possible.

Jan Baker, widow to the beloved and longtime local surf instructor Stan Searfus — who started the middle school club about five years ago with parent support — brought in the K-5 ages more recently. Iverson said six moms also help run the middle school groups. She said everyone assists though and works together as much as possible including student teachers.

Baker brings all her surfboards on hand, with about 20 being loaned out from her van and that number is growing as well as the wear and tear, she says through a grin. Stanship scholarships have also been given out to provide wetsuits when needed, Iverson shared.

Scott Teacherall — who graduated from Coronado, still surfs and surfed for Searfus his whole life — is on the beach every day with our middle schoolers, Iverson said. She added how Santiago “Santi” Girault was close to Searfus, shows up for the children as well, and wants them to love and enjoy surfing.

“It’s like the greatest thing for our kids to be doing right now,” Iverson said of the surfing groups who are able to leave their homes and yards for a safe, fun activity that allows socializing. “They get to be out in the ocean. They don’t have to wear masks. It’s normal. It’s healthy, interactive, exercise in nature.”

With over 130 members, the middle school club has more than doubled since last year, Iverson estimated, with 75-90 smaller children out there every Tuesday and Thursday in their neon green rash guards off the Coronado Shores at Stan’s Beach.

There were thoughts the groups wouldn’t be able to meet and surf, Iverson said. But everyone put a little work in to making sure everyone involved — from the city council to those in recreation and lifeguarding — understood what the groups were trying to do. Iverson said the entities wanted the youth to be able to surf too.

Iverson finds herself fascinated by the Coronado surf culture, noting how Searfus’ tradition along with his partners was to embrace a community-driven culture of surfing families, new to the sport or not, with activities and organizations available. Searfus would even go above-and-beyond and take young surfers on a paddle from Coronado to Point Loma, or head out on an overnight camping trip up to the Camp Pendleton area for a sunrise wake-up and day of surfing.

“It’s so community-oriented, collaborative, team-based and supportive,” Iverson said of the local surf culture, commenting on how other areas can have a more “Watch out!” attitude that doesn’t exist here. “I’m learning more about the love of surfing and ocean stewardship and ocean safety … The ocean is our backyard and we’re just enjoying the backyard we have.”

She explained how competing can be scary to head to beaches unknown and catch unfamiliar waves all by yourself, spread out even from those in your heat and adhering to rules. Searfus’ Blue Wave Surf school and the Coronado school club were providing something more.

“I wanted to keep what he had going,” Baker said of her late husband. “I personally don’t surf, but I believe strongly in the surf community and surf culture. I took it over and started running it myself … I just see how it brings the community together and brings family together. You set up a picnic and the whole family can go out surfing.

“Surfing is a sport you can do you your entire life. Some you don’t keep up with. Just the joy that it brings and the water is so grounding for families. And such a wonderful outdoor activity. And I just really believe strongly in keeping it going.”

Baker said Iverson asked if she and Blue Wave Surf would join in and help with the K-5 levels, aiding with staff and surfboards if possible. She continues to bring her van of boards each time for the community of surfers.

“It’s not a free-for-all, but they know if they need a board, come to Jan.”

Jessie Harsh’s son Brody just turned 7, and she said they’re thrilled this year’s surf club is being offered for the K-5 ages.

“It is awesome having a scheduled time to take Brody to go surf with his buddies twice a week. I have never seen my son happier and having more fun than when he is surfing. Surf club is definitely his favorite days of the week. I love seeing all the smiles and pure stoke from all the kids. We enjoy having a way to be part of the local surf community and all the good energy that is involved.

“It really helps! With just a few sessions he has improved a ton! He usually preferred boogie boarding and just standing on his boogie. My husband and I both surf and he refused to let us help him! Until we joined this,” she texted with a smiley face emoji. “Going with friends and seeing all the other kids out there made the difference. He likes to hang on the inside but the little waves are perfect. So fun watching all the little kids. They are all so cute. Loving the excuse to go to the beach and it’s very entertaining.”

Iverson’s son Austin is in seventh grade and her niece, Nikola, is a kindergartner who heads out too.

To learn more about Blue Wave Surf including surfing birthday parties, visit bluewavesurfing.com. To find out more about the middle school and K-5 surfing groups, head to their Facebook page for registration information, or feel free to head down to just check it out. This year there’s also an academic curriculum covering topics such as preventing skin cancer, a talk from lifeguards, marine biology, and the Emerald Keepers.

Keep it civil. Comments may be removed or closed if they violate Terms of Service.