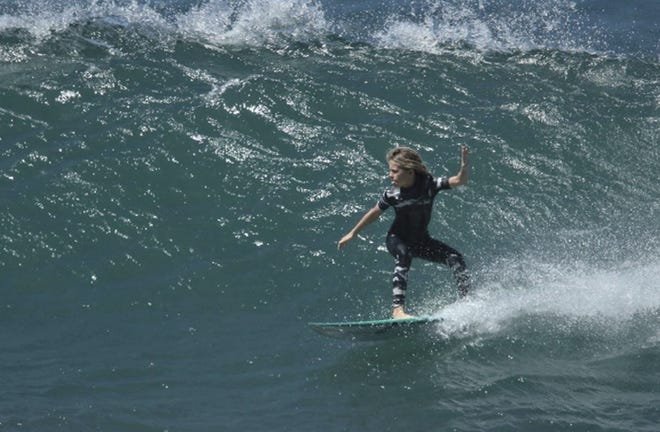 Lanea Mons is gifted sixth grader with a simple plan for her future.

“I want to live on Molokai, surf and have a horse,” she said of her hopes to be on the women’s pro surfing world tour by then and live on that Hawaiian island.

Her first major step was a success. Lanea just took third place in her first pro contest on Sept. 25 at the Wavemasters Pro Classic.

She even won both of her preliminary heats against many veteran local surfers. A week earlier she won all three of the divisions she entered at the Void Magazine Pro/Am: the junior women’s, girls 12 to 14 and her own girls 9 to 11.

Her father, Chris, a 30-year-veteran surfer, explains that the contests permit surfers to “surf up.” Leana likes the challenge of going against older contestants.

She is relatively new to surfing despite her father’s experience. Chris grew up in Hawaii and his parents still live there. He was about 10 when he started.

She brings to surfing the skills of an experienced competitive swimmer, which she began at age 5. Her mother, Jenny, was the swim coach for the Selva Marina Country Club.

According to Chris, she demonstrated fierce paddling strength in the challenging, windy conditions of the pro contest, something he attributes to that early swim training.

Lanea’s first contest was a 2018 event sponsored by Sisters Of The Sea, an area club with a goal of promoting surfing to women of all ages.

Home schooling allows for her travels. In her first year, she maintains an all A average in keeping with her her love of competing.

Chris is a St. Johns River bar pilot at Mayport and thus has a fluid schedule also, which allows for blocks of time for travel to surfing venues, like a recent trip to take on the surf from Hurricane Delta as it reached Panama City.

The family enjoyed three days of surf as Lanea prepared for the NSSA Nationals (National Scholastic Surfing Association) held Oct. 20-24 at Nags Head, N.C. This is the first time this major contest has been held on the East Coast. California normally hosts this even but due to COVID-19, it was moved there.

“I surf as much as I can,” said Lanea and her Atlantic Beach home is quite near the water. “I love ‘free’ surfing. I can really push myself and try new things when it doesn’t matter (like it would it a contest).”

“I don’t really prefer one over the other (contest surfing). You don’t want to ‘free’ surf in a contest because you’re not going to push yourself (with new moves). Contests make me improve because it pushes me to beat others.”

She has an impressive record. In September she took third in her division, Under 12, at the East Coast Championships (known as “The Easterns”), also held in Nags Head. It was the best surf she has enjoyed during a contest.

“The first day was nasty and crazy. Up to 15 feet,” she said, but she did not have to compete that day. “The next day, it was six feet and clean and perfect. Super fun. The last day it was just knee high.” Such is the fickle nature of the ocean.

A big milestone for her was being chosen for the ESA All-Star Team. That meant a week of training in Hawaii last Feburary before COVID-19 shut the world down.

The Mons family got in an extra week because Chris’ parents live there.

She took on some surf rated at 12 feet. The video Chris took shows a very poised young lady taking it in stride. Some of the biggest surf she had yet to ride came in 10-foot surf at the famous Lower Trestles in California from yet another surf adventure last July.

They took advantage of super cheap air fares and also had friends to stay with in nearby San Clemente. On the way home, thanks to a layover in Dallas, they took on some artificial waves at a park called the Barefoot Ski Ranch.

She has given up soccer, lacrosse and basketball to allow her to concentrate on surfing and her goals. But, she recently began to ride English saddle as she added horseback riding and jumping to her busy life. She now goes to Coriander Farms in Mandarin on occasion.

To help with the expenses of surfing, she has several sponsors. She is on the Sunrise Surf Shop team and has three boards from Peyzel of California/Hawaii. A former pro surfer friend owns Slow Yourself Down, a clothing company, with her father, and their sticker appears on her boards.

Lanea’s obvious love of what she does and her ability to focus on her goals foretells a bright future for this talented young lady.

Bill Longenecker is a Neptune Beach resident and regular contributor to Shorelines. Send feedback to shorelines@jacksonville.com.