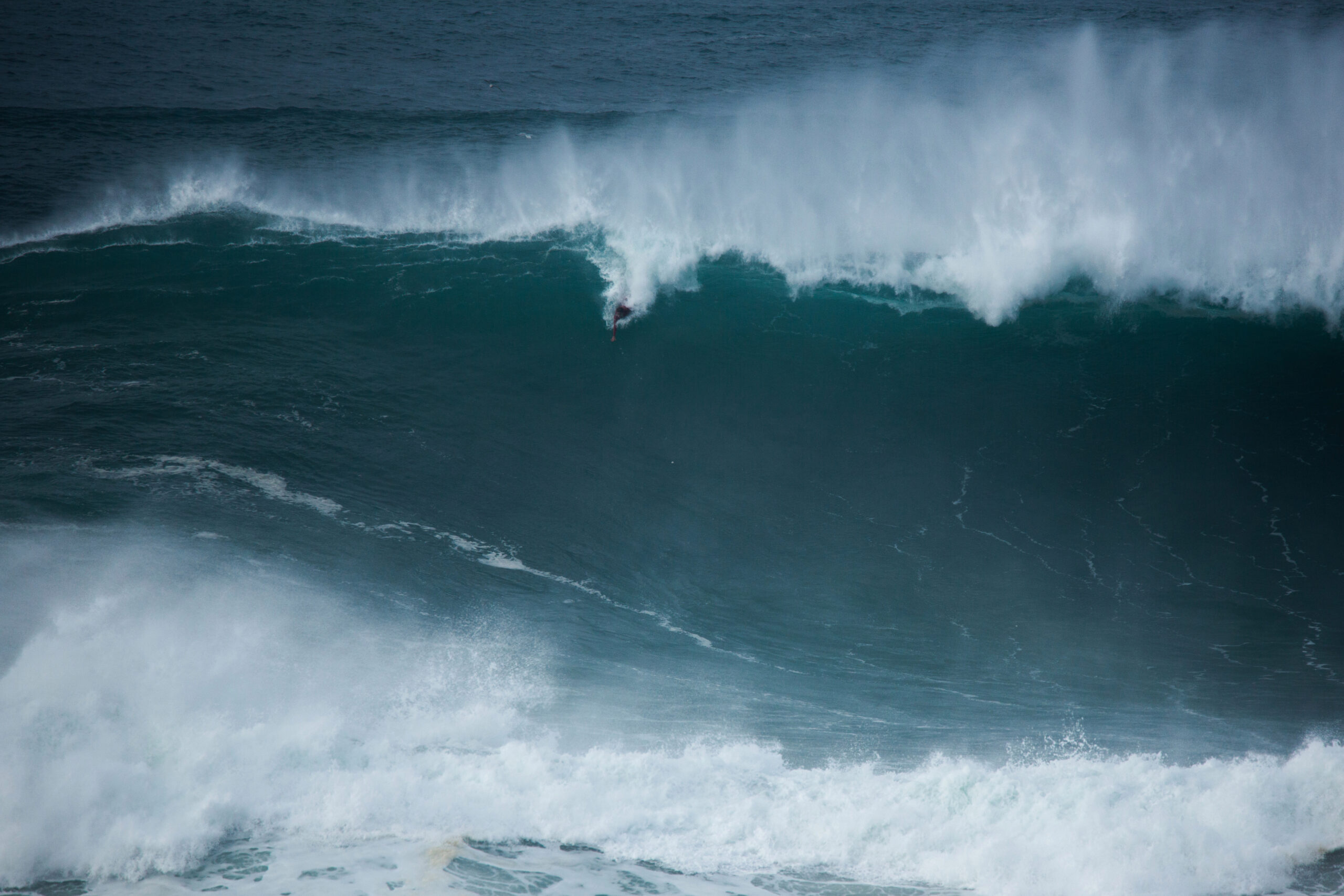 Early one morning in October of 2015, a 21-year-old Brazilian surfer named Kalani Lattanzi stepped onto the sand at Praia do Norte in Nazaré, Portugal. Muscular and clad in a tight wetsuit, Lattanzi was indistinguishable from the many surfers who, each day, stood on the beach where he now stood. Like all of his peers, Lattanzi was preparing to enter hallowed water, a devilish patch of ocean revered and feared for producing the world’s biggest swells. Just two years earlier, American surfer Garrett McNamara had been towed by a jet ski into an estimated 100-foot wave in these waters, a world-record ride that cemented Nazaré’s place in the pantheon of surf spots.

Lattanzi, however, planned to employ a different approach to surfing these legendary waves. He was going to paddle into the chaos without a critical piece of equipment: a board.

Later that morning, Australian Ross Clarke-Jones and American Jamie Mitchell, both professional big wave surfers, arrived at the beach. A major swell had descended on Praia do Norte and the two men were eager to get into the water before any other surfers arrived. As they headed out into the surf, Clarke-Jones was stunned to discover that they were not alone.

“The sun was rising and I saw this like, what appeared to be someone in the water swimming,” says Clarke-Jones in Kalani: Gift from Heaven, a short film documenting Lattanzi’s life and exploits in Nazaré. “Is that a seal, or is that a dolphin, or is it a shark? Fuck, that’s a man.”

As other surfers began to arrive at the beach, they were met with the fast-spreading news: a person was attempting to swim out into the lineup. To Portuguese big wave surfer Nic Von Rupp, this was an impossible task, a stroke of madness that would surely end in the mystery swimmer’s death.

“I was on the jet ski,” said Von Rupp in the film. “Everyone’s praying, ‘Guys, hope everyone survives, this is heavy shit right now, some of the biggest waves in the world.’ And all of a sudden we hear on the mic, ‘There’s a guy paddling’ … I was just like, ‘Holy shit this dude is going to die.’”

In the water, Lattanzi powered forward, swimming through massive waves and harrowing currents before finally settling amongst the riders in the lineup.

“In the beginning, people said, ‘What are you doing, you crazy?’” says Lattanzi. “But I said, ‘Oh, I’m just bodysurfing.’”

Kalani Lattanzi was born in Hawaii in 1994. Shortly after his birth, Lattanzi’s family relocated to Brazil, settling near Rio de Janeiro in Itacoatiara, a coastal neighborhood in the city of Niterói. Itacoatiara, which sits on the Atlantic Ocean, is one of the world’s premier surfing destinations, and was an ideal place for the young, water-obsessed Lattanzi to nourish his appetite for adrenaline.

From the outset, Lattanzi bucked convention, spurning the surfboards and bodyboards (also known as boogie boards) used by his friends, choosing instead to bodysurf the beach’s massive swells. Bodysurfing, as its name suggests, is the art of riding a wave using only one’s physical frame, a phenomenon familiar to anyone who has ever been carried to the shore, intentionally or not, by a breaking wave. At Itacoatiara, bodysurfing played third fiddle to surfing and bodyboarding, a reality that pushed Lattanzi to the bottom of the beach’s surfing hierarchy. This demotion guaranteed that his access to waves would be limited, an unacceptable reality for a young surfer.

“When you are bodysurfing and you are a beginner and you’re small … you don’t have priority on the beach,” said Lattanzi. “So I start bodyboarding.”

Lattanzi swiftly established himself amongst Itacoatiara’s stable of elite bodyboarders, earning a reputation for his uncanny ability to ride monstrous waves with a monk-like composure that belied his age and experience level. Speaking in Kalani: Gift from Heaven, Dudu Pedra, a professional bodyboarder and Itacoatiara local, recalls spotting these traits in the wunderkind.

“He’s always had this predisposition to throw himself into the sea,” says Pedra. “He is a very cool guy, very joyful, always smiling. He’s crazy … he takes this tranquility into the water, he is able to stay cool in any situation either on a flat day or in days like we’ve seen with waves above 50 feet.”

In 2011, Lattanzi’s budding talent landed him a spot on the International Bodyboarding Association (IBA) World Tour, renamed the Association of Professional Bodyboarding (APB) World Tour in 2014. The circuit, though geographically far-reaching — it currently features eight stops on four continents — lacks the financial strength of its professional surfing counterpart, the World Surf League (WSL). In 2019, the WSL’s top surfer netted $491,600 in prize money; the APB’s top earner took home $20,450. This financial reality was not lost on Lattanzi.

In need of a new path, Lattanzi turned his attention to the wild world of big wave surfing. The discipline, long a scattered sideshow compared to traditional surfing, was legitimized in 2014, when the WSL absorbed the five-year-old Big Wave World Tour (now the Big Wave Championship), providing a structured environment and a new financial opportunity for professional surfers. With only a small crop of riders willing to ride enormous, life-threatening swells but an abundance of sponsors and filmmakers eager to work with them, big wave riding had the potential to be a fast track to financial security. Lattanzi was sold.

In late 2015, he made his play, heading for the biggest of big wave destinations, a place of extremes that could help put him on the surfing world’s radar or, quite possibly, kill him: Nazaré.

“Do you know when you meet a person and you feel something good about it?” says Nuno Dias, the director of Kalani: Gift from Heaven. “I felt that about Kalani.”

A few days before meeting him, Dias saw Lattanzi paddle into the surf at Praia do Norte on that now-legendary morning in October of 2015.

“There was a really big swell and all the big wave surfers, the top guys were there,” says Dias. “Kalani went swimming from the village, he swam for about a kilometer or two in the ocean … and stayed there in the lineup, in the middle of those guys, bodysurfing for two or three hours … Every time there was a big set coming I thought, ‘Man, this guy is going to die.’”

Dias’s awe quickly turned to curiosity. He struck up a friendship with Lattanzi and the two eventually agreed to collaborate, a partnership that gave birth to Dias’s film. Shot over the course of three winter surf seasons in Nazaré, Kalani: Gift from Heaven offers a breathtaking exhibition of Lattanzi’s gravity-defying bodysurfing sessions, and features a who’s who of the world’s best big wave riders passionately explaining why Lattanzi is in a class of his own.

“The first time I saw him on a giant day bodysurfing, I thought he was a crazy guy,” says Maya Gabeira, the world record holder of the biggest wave ever surfed by a woman, in the film. “But nowadays I understand that he has a level of comfort and confidence in these conditions that’s way above mine, and I think all of us.”

Amidst the praise, however, the what-ifs persist. In Free Solo, the Academy Award-winning documentary chronicling Alex Honnold’s ropeless rock climb of Yosemite’s vaunted El Capitán, co-director Jimmy Chin says that, “It’s hard to not imagine your friend … falling through the frame to his death.” Dias understands this reality and felt its full, terrifying weight during a session in 2018. Just moments after watching Lattanzi bodysurf a 30-foot-wave, Dias lost sight of him. For 20 excruciating minutes, he and his peers searched frantically for a sign of Lattanzi in the surf. When Dias did finally spot him, he watched as Lattanzi, swimming in a huge rip current, managed to rejoin the lineup. He bodysurfed for another hour.

“When I bodysurf I am confident,” says Lattanzi. “When I am surfing it’s scary because I have the big board … But when I’m bodysurfing, it’s like no fear at all … I feel home.”

That confidence, that unwavering calm in the face of stomach-turning swells is what, in Dias’s view, makes Kalani a once-in-a-lifetime athlete.

“What Kalani does, no one in the world does,” says Dias. “Every guy is fit and understands the ocean at Nazaré, but the level Kalani is at, it’s — I don’t know, man — he’s like a fish.”

Dias’s characterization offers some insight on an unexpected aspect of his film. Lattanzi, despite being the movie’s unequivocal protagonist, is never interviewed and never once speaks on camera. His silence, though surprising at first, actually bolsters his legend, casting him, as Dias put it, as “an ocean god or Greek mythology character.”

Or maybe it’s simpler than that. Maybe the reason that Lattanzi doesn’t speak in the film is because silence is part of his DNA. Fish, of course, cannot speak.